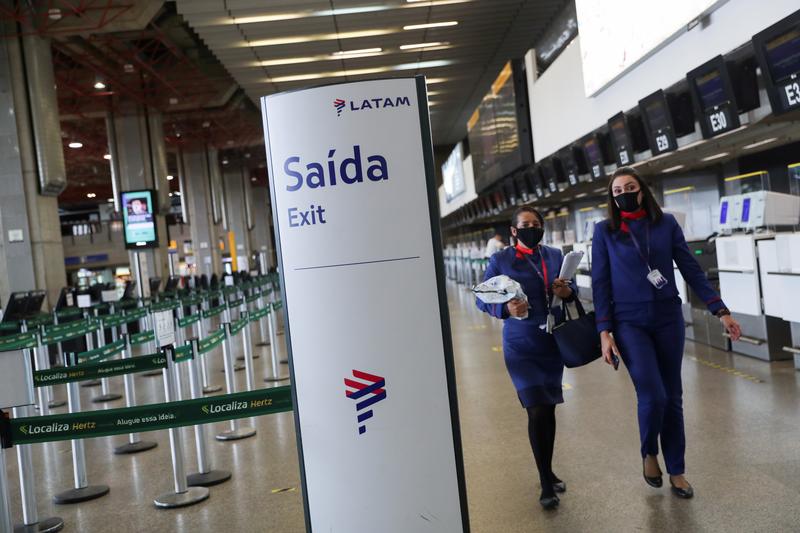 WASHINGTON (Reuters) – The White House on Sunday said it was prohibiting most non-U.S. citizens from traveling to the United States if they had been in Brazil in the last two weeks, two days after the South American nation became the world No. 2 hot spot for coronavirus cases.

FILE PHOTO: Latam Airlines employees walk at the company’s check-in hall at Guarulhos International airport as air traffic is affected by the outbreak of the coronavirus disease (COVID-19), in Guarulhos, near Sao Paulo, Brazil, May 19, 2020.REUTERS/Amanda Perobelli/File Photo

White House Press Secretary Kayleigh McEnany said the new restrictions would help ensure foreign nationals do not bring additional infections to the United States, but would not apply to the flow of commerce between the two countries.

National security adviser Robert O’Brien earlier on Sunday told CBS’ “Face the Nation” he hoped the move could be reconsidered at some point.

“We hope that’ll be temporary, but because of the situation in Brazil, we’re going to take every step necessary to protect the American people,” O’Brien said.

Brazil on Friday surpassed Russia to become the world No. 2 hot spot for coronavirus cases, second only to the United States, and now has over 347,000 people infected by the virus, the Health Ministry said.

U.S. President Donald Trump said on Tuesday he was considering imposing a ban on travel from Brazil.

“I don’t want people coming over here and infecting our people. I don’t want people over there sick either. We’re helping Brazil with ventilators. … Brazil is having some trouble, no question about it,” Trump told reporters at the White House.

O’Brien said the United States will look at restrictions for other countries in the Southern Hemisphere on a country-by-country basis.

Trump suspended entry for most travelers from China, where the outbreak began, in January. In early March, he imposed travel restrictions on people coming from Europe.

The new restrictions bar most non-U.S. citizens who have visited Brazil within the past 14 days. Green card holders, close relatives of U.S. citizens and flight crew members, among select others, would be exempt.