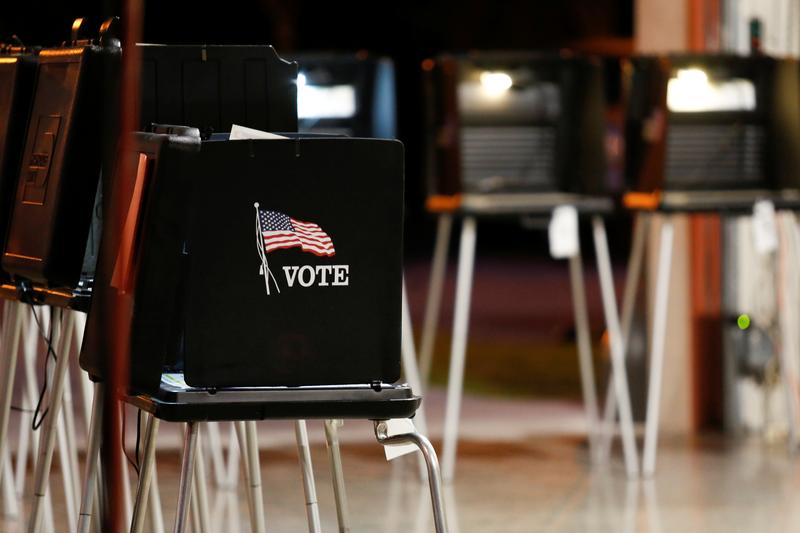 FILE PHOTO: A voting booth is seen at a polling center inside a fire station in the Coral Gables neighbourhood during the Democratic presidential primary election in Miami, Florida, U.S. March 17, 2020. REUTERS/Marco Bello

WASHINGTON (Reuters) – A U.S. judge ruled on Sunday that the state of Florida cannot force felons to pay legal fines and other fees before allowing them to register to vote.

The ruling, for now, clears the way for potentially hundreds of thousands of citizens to register to vote in the swing state for the November presidential election.

The ruling by U.S. District Judge Robert Hinkle found that a new state law amounts to an “unconstitutional pay-to-vote system” imposed on citizens who may not be able to pay fines, or even know if anything is owed.

“The state may disenfranchise felons and impose conditions on their reenfranchisement. But the conditions must pass constitutional scrutiny. Whatever might be said of a rationally constructed system, this one falls short in substantial respects,” said Hinkle’s ruling in the Northern District of Florida.

DeSantis will have the opportunity to appeal the ruling. His office did not immediately respond to a request for comment.

The Republican-led Florida Senate drew up the payments bill just months after Floridians approved a constitutional amendment restoring voting rights to felons who have completed their sentences. DeSantis signed the bill into law in June 2019.

At least 775,000 felons have unpaid legal costs, and African Americans are more likely to owe more, according to Daniel Smith, a University of Florida political scientist who testified in a report submitted to the court.

Conservatives argued the law was necessary to clarify what is required under the amendment, while critics of the measure said it effectively disenfranchised those potential voters again.