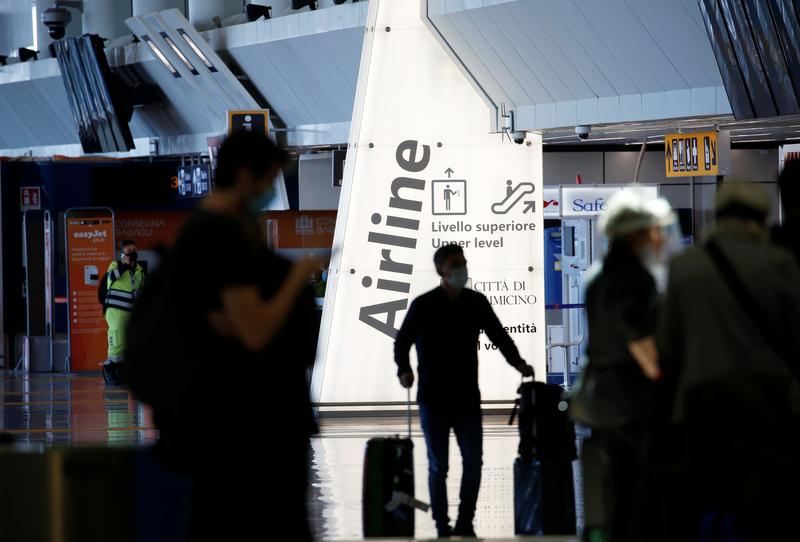 WASHINGTON (Reuters) – The Trump administration failed to conduct effective coronavirus screenings of airline passengers entering the United States from Italy and South Korea in early March, when cases of the virus were multiplying, a U.S. House of Representatives subcommittee said on Thursday.

Passengers stand at the Fiumicino airport, after Italy begun a gradual end to a nationwide lockdown due to the coronavirus disease (COVID-19), in Rome, Italy May 6, 2020. REUTERS/Remo Casilli

Representative Raja Krishnamoorthi, the Democratic chairman of the House oversight subcommittee, said information from several U.S. agencies showed the administration did little to stop the spread of the virus through U.S. airports from those two hot spots until mid-March.

White House officials relied on Italian and South Korean screeners to check passengers boarding flights for the United States between March 3 and 14. But U.S. officials had “relatively limited oversight” for health screenings in Italy, which only barred 13 passengers from flying to the United States, a statement from the oversight subcommittee said. South Korea barred 56.

“The administration lost critical time it could have used to prepare and build up capacity to mitigate,” Krishnamoorthi, who chairs the subcommittee on economic and consumer policy, said in a statement.

Congress has been largely sidelined for over a month by the coronavirus pandemic, although it has passed nearly $3 trillion in relief. The House has not been in regular session since late March.

Krishnamoorthi’s announcement signaled lawmakers are moving toward more aggressive oversight of the administration’s response, although they have not conducted any hearings yet.

The Democratic-majority House has voted to create a separate committee of lawmakers to police the Trump administration’s coronavirus response, but it has not yet gotten off the ground; Republicans only named their members on Thursday.

Republican President Donald Trump repeatedly has said he slowed the spread of the coronavirus into the United States by acting decisively to bar travelers from China on Jan. 31.

But the White House decided to rely on Italy and South Korea to do these screenings before passengers boarded, the House subcommittee said.

The U.S. policy tightened by mid-March. On March 11, Trump said he was sharply restricting travel from Europe, and on March 13, the Department of Homeland Security said U.S. passengers that had been to Europe, China and Iran would undergo “enhanced screening” on arrival.