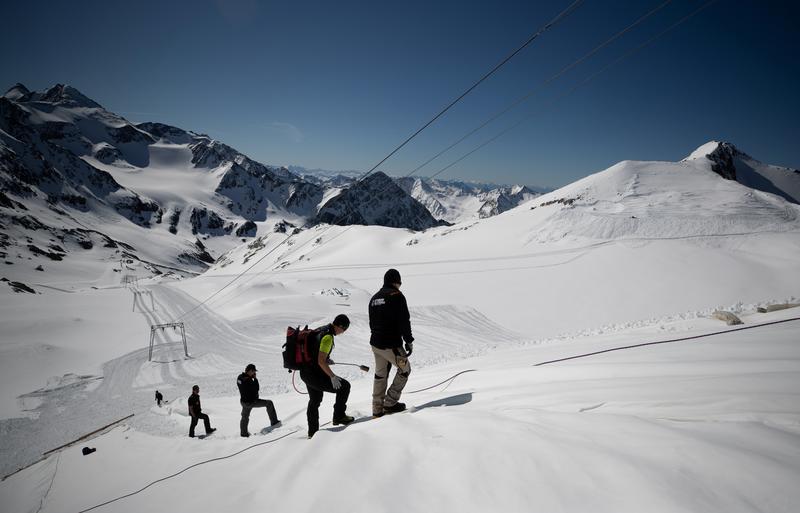 STUBAI GLACIER, Austria (Reuters) – With its season cut short by the coronavirus pandemic, one of Austria’s most popular glacial ski resorts covered its glacier in protective fabric earlier than usual this year to help preserve it for a still uncertain reopening.

Workers stand on Vlies fabric, which is used to cover the snow of a glacier at Stubaier glacier ski resort near Neustift im Stubaital, Austria, May 7, 2020. REUTERS/Lisi Niesner

In a normal year, Austrian ski resorts stay open until April, by which time much of their snow has melted in the spring sunshine, making skiing less than ideal.

On glaciers, however, snow survives much longer, so resorts built on them stay open longer, sometimes all year.

The temperature in the eastern Alps is rising even faster than the global average, and its glaciers are shrinking. It has therefore become a habit at many glacial resorts to cover the part of their ice mass most heavily used for pistes and lifts, to shield it from the intense mountain sun.

At the Stubai Glacier resort at the end of a valley near Innsbruck, the capital of Tyrol province, that involves covering 26,000 square metres of glacier – roughly four times the playing area of a soccer pitch – with strips of thick white fabric.

The process also helps preserve a stock of snow, as deposits from elsewhere in the resort are laid on top of the ice first.

“This winter was altogether snow poor – we had a lot of snow all at once in November, after that not so much. At the moment it is white all around, it looks very good, but large amounts of snow were absent this year,” the resort’s piste chief Christoph Hofer said.

Tyrol has had more coronavirus infections than any other province as ski resorts’ crowded apres-ski bars became breeding grounds for the disease. The nearby resort of Ischgl and its surroundings were the source of Austria’s biggest cluster, and Tyrol’s government ordered an end to the ski season at all resorts in mid-March.

In Stubai, the season would normally run until early June. But Hofer said they were using the closure to preserve better snow gathered while the resort lay dormant – “good, cold snow, not soaking wet snow” – though he was cautious about conditions when the resort reopens, hopefully in September.

“The good snow depends slightly on Frau Holle,” he said, referring to a German fairy tale in which feathers from a woman’s bed fall as snowflakes when it is made.

“But I think we were able to form a good foundation this year.”