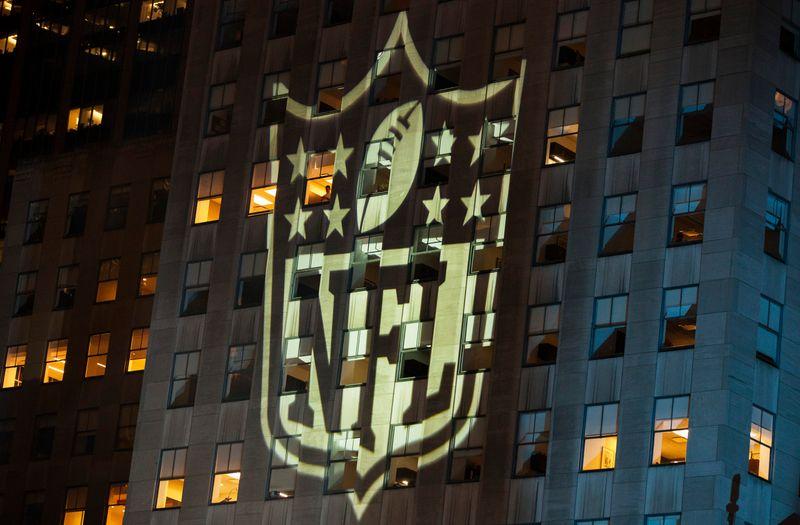 NEW YORK (Reuters) – The NFL outlined criteria on Wednesday for teams to begin reopening facilities, as professional sports leagues across North America navigate their way through the coronavirus outbreak.

FILE PHOTO: A man stands at a window lit by the NFL logo as he watches performances during the 2012 NFL kickoff show in New York September 5, 2012. REUTERS/Lucas Jackson

The NFL said the first phase would involve the gradual return of employees to facilities, starting with up to 50% of non-player staffers, while maintaining screening and proper social distancing procedures.

“We have devoted considerable effort in recent weeks to developing a set of protocols for the reopening of club facilities,” NFL Commissioner Roger Goodell said in a memo obtained by Reuters.

“Clubs should take steps to have these protocols in place by Friday, May 15 in anticipation of being advised when club facilities will formally reopen.”

All employees who return to facilities would be required to undergo “COVID-19 safety and hygiene training” and all teams must put in place an “Infection Response Team” and an “Infection Control Officer” under the guidelines.

The league said the protocols were formed after consultations with a panel that included infectious disease experts, the Centers for Disease Control and Prevention, as well as the NFL Players Association (NFLPA) medical director.

“We are actively working on the next phase of reopening, which will involve both greater numbers of staff and players as well,” said Goodell.

“We are actively working with the NFLPA on the protocols that would apply to player access to facilities and expect to have those protocols developed fairly soon.”

State and local laws will also factor into the timeline for reopening club facilities, with some U.S. states reopening (here) and others maintaining strict social distancing procedures.

The news comes as the NBA is expected to allow heavily restricted practices for teams as early as Friday, while NASCAR is set to resume races without fans later this month.

While the gradual reopening of NFL facilities would be unlikely to resemble a franchise in full swing, the move would mark a critical step for the league as it hopes to kick off its regular season on time.

NFL’s 2020 season is scheduled to begin on Sept. 10, with a full slate of games to be announced on Thursday, weeks after its annual draft pivoted to a “virtual” format with players and personnel behind closed doors.

Earlier this week the league scrapped regular season games in London and Mexico City, citing concerns over the COVID-19 pandemic.