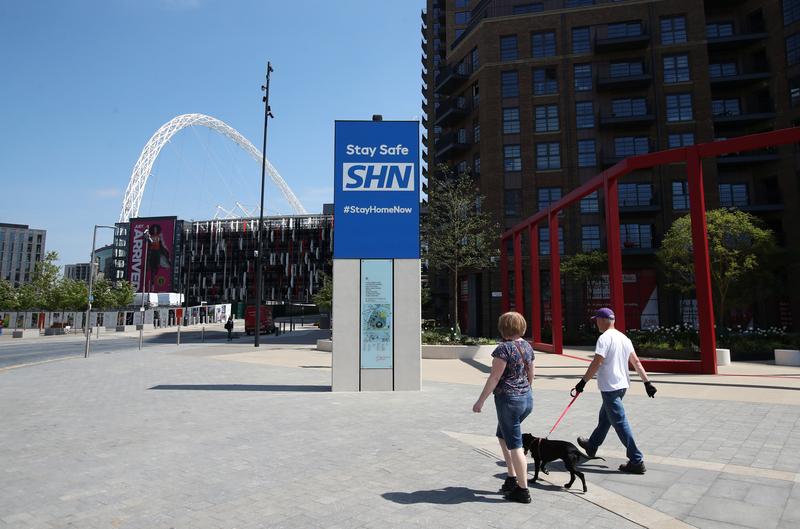 LONDON (Reuters) – Prime Minister Boris Johnson will announce a very limited easing of Britain’s coronavirus lockdown next week, adopting a cautious approach to ensure there is no second peak of infections that could further hurt the economy.

A public health campaign message is seen as people walk a dog outside Wembley Stadium, following the outbreak of the coronavirus disease (COVID-19), London, Britain, May 7, 2020. REUTERS/Peter Cziborra

Johnson is due to announce the next steps in Britain’s battle to tackle the novel coronavirus on Sunday following a review by ministers of the current measures that have all but shut the economy and kept millions at home.

His government has been criticised for moving too slowly to tackle the outbreak which has led to more than 30,000 deaths in Britain, and after more than six weeks of lockdown, ministers are judging how and when to relax it.

Ministers, who say they have taken the right decisions at the right time, fear a swift easing could lead to a second peak in infection rates, which might overwhelm hospitals and force a second shutdown of the economy.

At a cabinet meeting of his top ministers, Johnson said Britain would advance “with maximum caution” and be guided by the science and data when considering whether any of the strict social distancing measures could be eased.

“Any easement to the guidelines next week will be very limited,” his spokesman told reporters.

“We are at a critical moment in the fight against the virus and we will not do anything which risks throwing away the efforts and sacrifices of the British public.”

Earlier, the Bank of England underlined how deeply the lockdown had hurt the economy, saying Britain could be headed for its biggest economic slump in over 300 years.

Johnson, who says he fought for his life after himself contracting COVID-19, has ploughed money into a support programme for businesses, but appears to be erring on the side of caution of immediately firing up the economy.

Officials suggest there will be a gradual move towards re-opening businesses. Ministers say that those operating outdoors might be able to find a way to work in the summer months but have warned that it was too soon to re-open schools.

To try to shore up support for his action plan, Johnson briefed opposition leaders on the latest situation, with Labour leader Keir Starmer saying there needed to be a national consensus on the next steps in tackling the virus.

“He also reiterated the seven principles that he wants the government to consider when planning for the next phase, including safety at work and preventing a cliff-edge to the job protection scheme,” a spokesperson for Starmer said.

Johnson also wants to pursue a strategy that unites the four countries of the United Kingdom: Scotland, Wales, England and Northern Ireland, with his spokesman saying the four-nation approach was the best way forward.

But Scotland’s First Minister Nicola Sturgeon said the only change to the lockdown which had been floated in the media that she might agree to in the immediate future was the limit on people only exercising once a day.

“I must make judgments informed by the evidence that are right and safe for Scotland,” Sturgeon, who will decide on whether to ease measures in Scotland, told reporters.