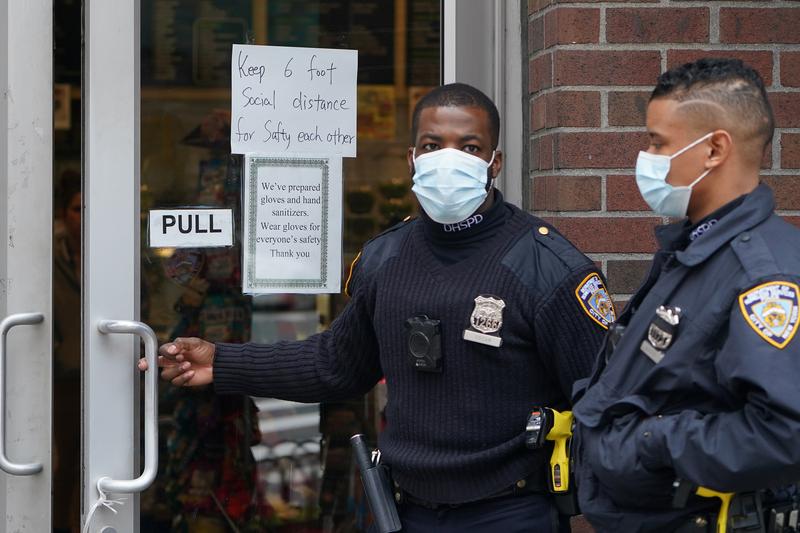 (Reuters) – New York, experiencing more coronavirus deaths and infections than any other U.S. state, is showing tentative signs of slowing the spread of the virus, Governor Andrew Cuomo said, while the health crisis deepened in hard-hit New Orleans and elsewhere.

The rate of hospitalizations in New York has slowed in recent days, Cuomo said, with numbers he called “almost too good to be true.” But he said much more work needed to be done.

New Orleans, where large crowds celebrated Mardi Gras a month ago, was on track to become the next U.S. epicenter, with the world’s highest growth rate in coronavirus cases.

Cuomo announced new “density-control” steps he said sought to contain the virus, with New York City, home to more than 8 million people, closing some public streets to vehicles and opening them instead to pedestrians to facilitate “social distancing” to avoid infections.

At a news conference, Cuomo said the city also would ban basketball and other contact sports in parks, first on a voluntary basis as long as people comply.

“Our closeness makes us vulnerable,” said Cuomo, who has emerged as a leading national voice on the coronavirus.

Cuomo said more than 30,800 people had tested positive for the virus in his state and more than 17,800 in New York City alone. The state has reported 285 deaths and roughly half the country’s reported infections. The state was among the earliest to close non-essential businesses and take other measures to keep people apart to prevent infections.

“This is a very good sign and a positive sign, again not 100% sure it holds, or it’s accurate but the arrows are headed in the right direction,” Cuomo said.

Testing for the virus remained a challenge in New York and around the United States. At Elmhurst Hospital Center, which serves about 1 million people in New York’s Queens borough, scores of people, most wearing surgical masks, queued up on Wednesday to be tested at a tent set up outside.

The White House on Tuesday advised people who had visited or left New York to isolate themselves for 14 days, but Cuomo and his medical adviser played down that White House advice.

Nationwide, about 60,000 people have been diagnosed with COVID-19, the respiratory disease caused by the virus that is particularly perilous to the elderly and people with pre-existing medical conditions, with at least 812 U.S. deaths.

Officials walk into a store that has a “Social Distancing” sign on the door during the outbreak of coronavirus disease (COVID-19), in the Manhattan borough of New York City, New York, U.S., March 25, 2020. REUTERS/Carlo Allegri

The impact was increasingly being felt beyond the hot spots of New York, California and Washington state as Louisiana and others faced a severe crush on their healthcare systems.

Minnesota Governor Tim Walz on Wednesday directed residents to stay home for two weeks starting on Friday to try to prevent new infections. Such orders at the state level affect about half the total U.S. population of roughly 330 million people.

The deteriorating situation in New Orleans dashed hopes that less densely populated and warmer-climate cities would escape the worst of the pandemic. Local authorities have warned that hospitals in the Mississippi River port city could reach the point of collapse by April 4.

U.S. President Donald Trump issued new major federal disaster declarations for Louisiana and Iowa late on Tuesday and for Texas and Florida on Wednesday, freeing up federal funds to help states cope. New York, California and Washington state were given such status previously.

New Orleans is the biggest city in Louisiana, the state with the third-highest case load of coronavirus in the United States on a per capita basis after the major epicenters of New York and Washington. The number of cases in New Orleans rose by 30% in the 24 hours before noon on Wednesday. Louisiana has reported 65 deaths and nearly 1,800 infections.

“It’s a highly infectious virus and Mardi Gras happened when the virus was in the United States but before the CDC (Centers for Disease Control and Prevention) and national leaders had really educated the public or even acknowledged the extent to which it was in the U.S.,” Gee said. “We had the president saying, ‘It’s just a few people, don’t worry about it.’”

“People don’t know what to expect or how long this will last. Everyone is worried about their jobs,” said Evans, 32, whose restaurant Blue Oak BBQ is a few steps from the renowned Bourbon Street. The restaurant is offering takeout orders only.

“People are still coming out, but they’re scared. This is as bad as Katrina or worse,” he said, referring to the hurricane that devastated the city in 2005.

Bruce Hamilton, 48, an attorney, said people in New Orleans were on edge. “And culturally, we’re a city where people like to gather together. We just can’t do that now,” Hamilton said.

Trump, seeking re-election on Nov. 3, on Tuesday said he wanted to reopen the country by Easter Sunday – far sooner than public health officials have said is warranted – but later told reporters he would listen to recommendations from the nation’s top health officials.

Joe Biden, the front-runner for the Democratic nomination to face the Republican president, criticized Trump on Wednesday, saying, “We have to do it in a smart way – to not meet some arbitrary or symbolic timeline.”

Quarantine a boon for some Hong Kong hotels as thousands return
Mnuchin expresses hope a deal is ‘very close’ on $2 trillion coronavirus aid package in U.S. Senate
On Oklahoma plains, an island of near normality in a pandemic
U.S. could be next ‘virus epicenter’, as India locks down, global recession looms
UK coronavirus deaths top 1,000 as country steps up testing