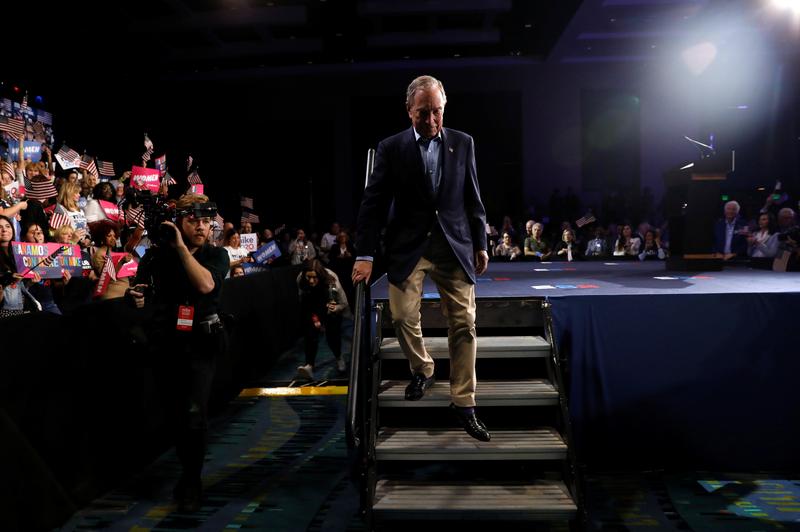 WASHINGTON/NEW YORK (Reuters) – The search for a Democrat to challenge Republican U.S. President Donald Trump in the Nov. 3 election narrowed on Wednesday to a choice between Bernie Sanders and Joe Biden, who staged a comeback in voting Super Tuesday to become the undisputed standard-bearer of the party’s moderate wing.

In an unexpectedly strong showing, former Vice President Biden was set to win 10 of the 14 states up for grabs on Tuesday, including the major prize of Texas. He stormed ahead in the overall tally of delegates who will choose a presidential nominee at the Democratic convention in July.

Bloomberg on Wednesday gave up his presidential campaign and endorsed Biden, after spending hundreds of millions of dollars of his own money on ads across the United States. But Bloomberg failed to deliver convincing results on Tuesday, the biggest day of voting in the Democratic nomination campaign with contests in 14 states across the country.

“I’m sorry we didn’t win,” Bloomberg, 78, told a crowd of supporters in a New York City hotel. “A viable path to the nomination just no longer existed.”

He said he was endorsing Biden because he had the best shot at beating Trump. “I hope you will join me in working to make him the next president.”

Sanders, a democratic socialist who is popular with young voters, lashed out at what he said was “the kind of venom we’re seeing from some in the corporate media,” and attempted to draw a stark contrast between himself and Biden.

“What this campaign, I think, is increasingly about is: Which side are you on?” Sanders told a news conference in Vermont. He attacked Biden’s record voting in favor of trade deals that he says had devastated parts of the Midwest, Biden’s votes in favor of the Iraq war and a bankruptcy bill, and his past record on Social Security.

The liberal U.S. senator, who was seeking to become the nation’s first female president, had disappointing results across the board on Tuesday, including coming in third in her home state of Massachusetts.

The Dow Jones Industrial Average .DJI was up 4% and the S&P 500 .SPX gained 3.5% in late afternoon trading, rising for only the second time in 10 days after being battered by fears about the coronavirus outbreak.

Sanders said he had spoken to Warren over the phone on Wednesday.

“Elizabeth Warren is a very, very excellent senator, she has run a strong campaign. She’ll make her own decision in her own time,” Sanders told a news conference in Vermont.

Tallies after Tuesday showed Biden leading Sanders in delegates overall by 433 to 388. A candidate needs 1,991 delegates to win the Democratic nomination on the first ballot at the July convention.

Fox News and the Associated Press projected Sanders winning California, where 415 delegates are up for grabs. By Wednesday afternoon, Sanders was ahead by 8.7 percentage points with almost 87% of precincts reporting.