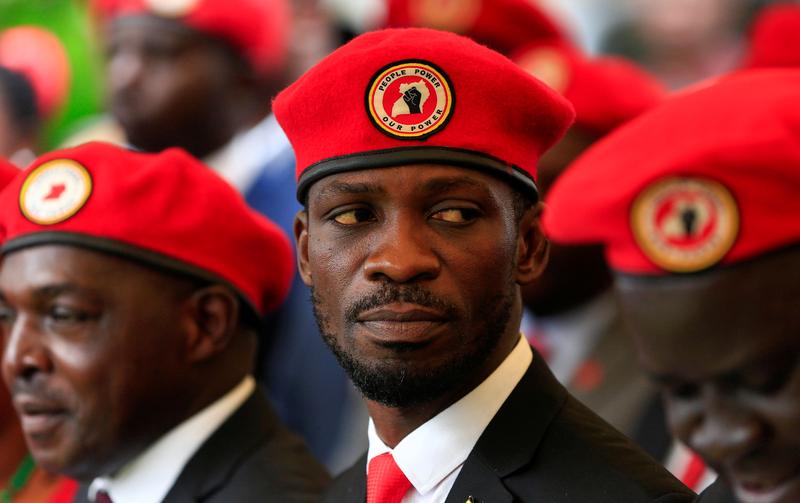 KAMPALA (Reuters) – Police in Uganda on Monday fired tear gas to disperse supporters of pop star and presidential hopeful Bobi Wine when he tried to hold a rally, underscoring the hurdles he faces in seeking to unseat President Yoweri Museveni.

Police also arrested Wine, a lawmaker whose real name is Robert Kyagulanyi, accusing him of trying to stage an illegal assembly.

Wine and his pressure group People Power had aimed to start a program of consultations with supporters on his plans to stand for president next year in a challenge to Museveni, 75, who has ruled Uganda since 1986.

Edson Muhangi, a police commander, told reporters that Wine was attempting to hold his meeting in an open area when he had only been allowed to meet supporters in an enclosed area like a conference hall.

“This one is not an enclosed place, we can not even allow them to be here,” Muhangi said.

“We are reliably informed that their aim is to engage us so that they can be seen exchanging words, fighting with the police and tarnishing the image of Uganda.”

Uganda’s Electoral Commission had cleared Wine to conduct the consultations, but security personnel have broad powers to allow or prohibit public gatherings.

Police arrested Wine as he and his supporters attempted to start the meeting and he was held at a nearby police post, Wine said on Twitter.

Security personnel in Uganda routinely break up opposition rallies with tear gas, beatings and detentions. Human rights activists have accused the police and the army of rights violations.

Since he became a legislator in 2017, Wine has rattled Ugandan authorities, who see him as a formidable threat to Museveni.

The Daily Monitor newspaper reported that a day-old baby had been rushed to a hospital in critical condition after inhaling tear gas used to disperse the crowd. Police spokesman Patrick Onyango said he could not comment.

Robert Ssempala, head of the Human Rights Network for Journalists-Uganda, told Reuters two local reporters had been briefly detained as they covered the confrontation.

He condemned the police response as “high handed and unlawful”.