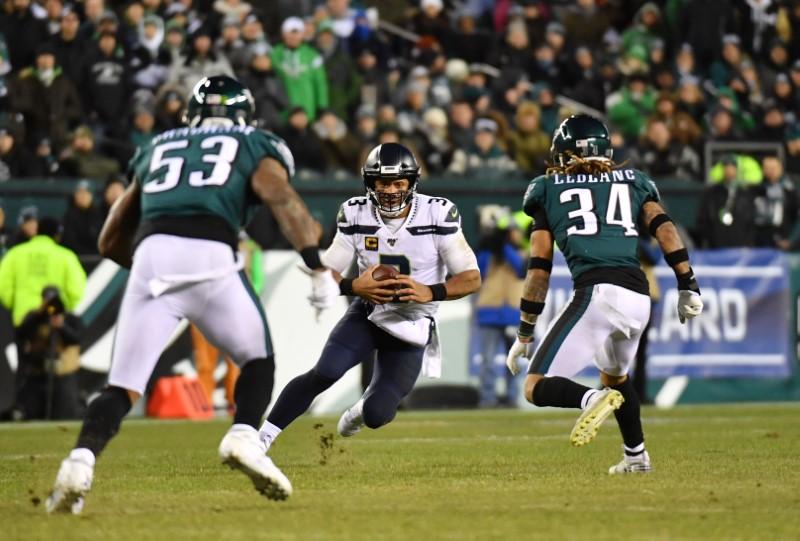 (Reuters) – Russell Wilson guided the Seattle Seahawks past the depleted Philadelphia Eagles 17-9 and the Minnesota Vikings stunned the New Orleans Saints 26-20 in overtime in NFC wildcard victories on Sunday.

The win sends the Seahawks to Green Bay to face the Packers while the Vikings travel to meet the top-seeded San Francisco 49ers in NFC Divisional Round contests next weekend.

Quarterback Wilson iced the game for Seattle when he hit DK Metcalf with a 53-yard touchdown pass in the third quarter to give the Seahawks a 17-6 lead.

Metcalf fell down short of the goal line but was untouched and recovered to make it into the end zone.

“He had so many yards, he was making plays all over the field,” said Wilson of the 22-year-old wide receiver, who caught seven passes for 160 yards.

Philadelphia played all but nine minutes of the game behind 40-year-old quarterback Josh McCown after starter Carson Wentz suffered a head injury when tackled by Seattle’s Jadeveon Clowney in the first quarter.

In the day’s earlier wildcard game, Kyle Rudolph caught a four-yard pass from Kirk Cousins to seal the overtime win for the Vikings.

“Nobody gave us a chance to win here today except everybody in our organization,” Rudolph said.

“They (the Saints) brought all pressure and Kirk made a great throw. I’m proud of Kirk, blocking out the noise and coming down here and playing huge all game.”

The oft-criticized Cousins completed 19 of 31 passes for 242 yards and the touchdown. His 43-yard pass to Adam Thielen had put the Vikings in scoring position at the New Orleans two-yard-line.

Vikings running back Dalvin Cook rushed for two touchdowns to spark the Vikings to a 20-10 lead before the Saints rallied, with Wil Lutz’s 49-yard field goal with two seconds left in regulation forcing overtime.

Cook, who rushed for 94 yards, had scoring runs of five and one yards, the first after New Orleans quarterback Drew Brees was intercepted.

Saints backup quarterback Taysom Hill set up a four-yard touchdown run by Alvin Kamara with a 50-yard pass in the second quarter to give New Orleans a 10-3 lead.

Hill later caught a 20-yard pass from Brees in the fourth quarter to bring New Orleans within 20-17.

Brees passed for 208 yards but along with his interception also had his first fumble of the season.

The loss was a bitter one for the Saints, who last season had lost at home to the Los Angeles Rams in overtime in the NFC Conference Championship game.

The Saints, NFC South champions, had gone 13-3 in the regular season.