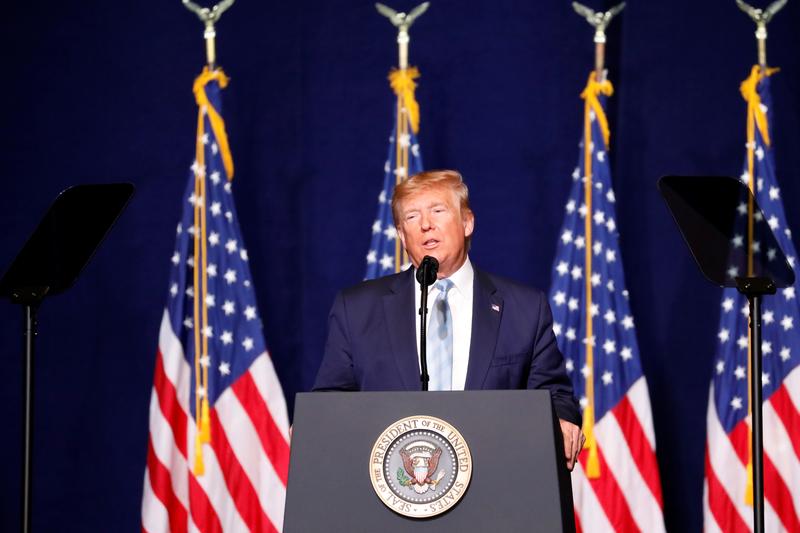 MIAMI/WASHINGTON (Reuters) – U.S. President Donald Trump on Friday said his Democratic opponents would tear down crosses and pledged to bring prayer to public schools at a re-election rally to shore up evangelical support.

Trump spoke on the outskirts of Miami at the King Jesus International Ministry, a “prosperity gospel” church that teaches that the faithful will be rewarded with health and wealth on earth.

“We are defending religion itself, it’s under siege,” Trump said. “A society without religion cannot prosper.”

More than 80% of white evangelicals voted for Trump in the 2016 election. But a crack in evangelical support opened up last month when the magazine Christianity Today wrote a blistering editorial on Trump’s “grossly immoral character.”

Attendees, some of them wearing Trump’s signature red campaign hats, nearly filled the room, which the church says holds 7,000. Some raised their hands in a sign of praise and swayed while music played loudly over the speakers before the president entered the room.

Pastors gathered around Trump on the stage for an opening prayer, while much of the audience remained standing with their hands aloft.

In his speech, Trump mocked Democratic challenger Pete Buttigieg, the Indiana mayor, for having what he said was an unpronounceable last name, and told attendees Democrats were waging war against religion.

“These angry radicals want to impose absolute conformity by censuring speech, tearing down crosses and symbols of faith and banning religious believers from public life.”

He got a big reaction from the crowd when he promised to bring religion into U.S. schools. A clause in the U.S. Constitution prohibits the government from promoting one religion over the other, which means public schools don’t promote prayer or religious symbols.

“Very soon I’ll be taking action to safeguard students and teachers’ First Amendment rights to pray in our schools,” Trump said. “They want to take that right along with many other ones.”

According to a 2019 survey here by the Pew Research Center, 43% of U.S. adults, or some 110 million people, identify with Protestantism; 59% of those, or 64 million are born-again or evangelical Christians.

Christian support for Trump remained relatively constant from his inauguration until March of 2019, Pew Research shows. Some Christians believe that support has frayed since.

Friday’s rally “is Trump’s desperate response to the realization that he is losing his primary voting bloc — faith voters,” said Doug Pagitt, the executive director of Vote Common Good, a progressive Christian group, on Friday.