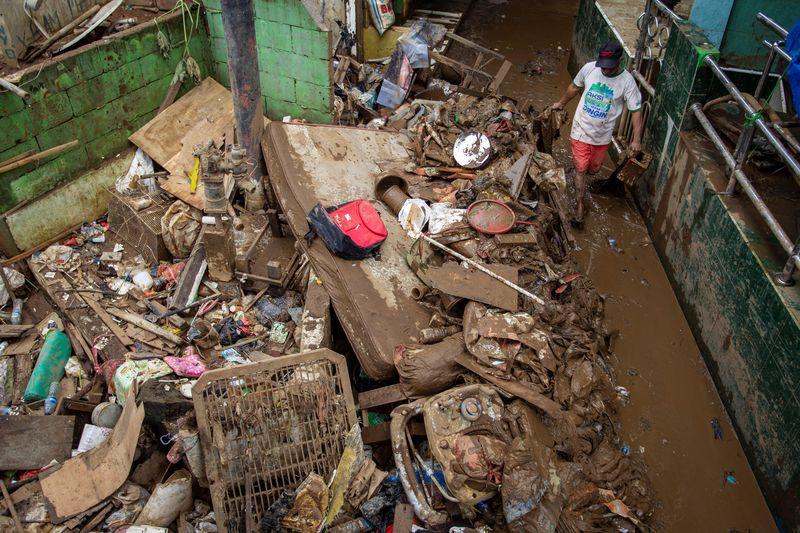 JAKARTA (Reuters) – Floods that killed more than 50 people in Indonesia’s capital after the biggest rainfall since records began should be a wake-up call to climate change in one of the world’s biggest carbon emitters, environmental groups said.

A man cleans up the clay after floods hit in Jakarta, Indonesia, January 3, 2020 in this photo taken by Antara Foto. Antara Foto/Dhemas Reviyanto/ via REUTERS

But, despite the catastrophe in Southeast Asia’s biggest city, authorities see no greater impetus for more cuts to planned carbon dioxide emission reductions or other measures to address climate change.

The floods “should serve as a strong reminder to the government that things can’t be business as usual,” said Yuyun Harmono, a campaign manager at the Indonesian Forum for the Environment, the country’s biggest green group.

With one of the world’s longest coastlines Indonesia, the world’s fourth most populous country, is extremely vulnerable to climate change. The metropolitan region of the capital Jakarta is home to 30 million people and parts of the city near the coast are sinking just as sea levels are rising.

However, the country is the world’s fifth-largest emitter of the greenhouse gases that are blamed for causing the climate crisis. It is also the world’s top exporter of both thermal coal and palm oil, whose cultivation has reduced the amount of carbon dioxide absorbing forests.

At least 53 people were killed after the rains on New Year’s Day, Indonesian authorities said on Saturday. Nearly 175,000 people remain evacuated from their homes.

“The impact of a one degree increase can be severe,” Dwikorita Karnawati, the head of the agency, told a news conference on Friday. “Among that is these floods.”

The floods were “a big wake up call,” said Hidayah Hamzah, a research analyst at the World Resources environmental group in Jakarta.

“WE DON’T CARE ABOUT THE ENVIRONMENT”

Social media users criticized the government for not doing enough on climate change after the flooding. Twitter user @wolfiecoconut said: “Indonesia is a country that is prone to disaster but we don’t care about the environment.”

But the green lobby has little sway in Indonesia.

Only 18% of Indonesians believe there is a link between human activity and climate change, according to a 2019 survey, the smallest percentage among the world’s 23 biggest countries.

When asked if the government would do more on climate issues after the floods, the Ministry of the Environment and Forest’s Climate Adaptation Director Sri Tantri Arundhati said on Friday there are no plans to change policy or shift the targets for cutting carbon dioxide output it agreed under the Paris Accord.

Rida Mulyana, director general for electricity at the energy ministry, said the government would stick to a plan for moving to renewables that means more than half of power generation will still rely on coal for the next decade.

Part of the government’s solution for Jakarta’s regular floods, which are not usually as bad as the recent ones, is to move the capital to the island of Borneo by 2023, a plan environmentalists fear will exacerbate deforestation.

“There aren’t a lot of people who realize the impact of climate change,” said Nirwono Joga, a researcher at the Urban Studies Center in Jakarta.

“When the flood recedes and people get back to their homes and resume normal activities, flood management or concrete actions to combat climate change will be forgotten too.”