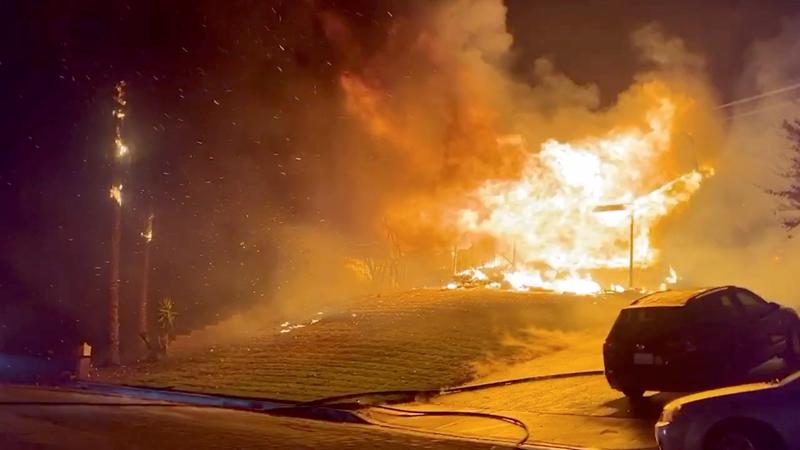 A house burns during wildfires in San Bernardino, California, U.S. October 31, 2019 in this screen grab obtained from a social media video. 564FIRE via REUTERS

“The winds have calmed down and this is nothing but good news,” he said. “It remains extremely dry to so more (fire) spreading is possible, but there are no elevated fire concerns.”

On Sunday, authorities lifted the last of several mandatory evacuation orders that had affected some 180,000 residents at the height of the Kincade fire last week, a Cal Fire spokeswoman said.

The fires sparked a war of words between U.S. President Donald Trump and California Governor Gavin Newsom when Trump threatened, as he has before, to cut off federal aid.

“Every year, as the fire’s rage & California burns, it is the same thing-and then he comes to the Federal Government for $$$ help,” Trump said of Newsom. “No more.”

Newsom shot back on Twitter: “You don’t believe in climate change. You are excused from this conversation.”

The Maria Fire, which broke out on Thursday near the community of Santa Paula about 70 miles (110 km) northwest of downtown Los Angeles, had destroyed two structures and burned more than 9,400 acres (3,800 hectares), the Ventura County Fire Department said.

Evacuation orders in Ventura County were lifted on Saturday, when the fire department said the blaze was 20% contained. More than 10,000 residents had previously been told to evacuate at the peak of the fire’s rapid spread.

Reporting by Rich McKay, additional reporting by by Gabriella Borter and Peter Szekely; Editing by William Maclean and Cynthia Osterman