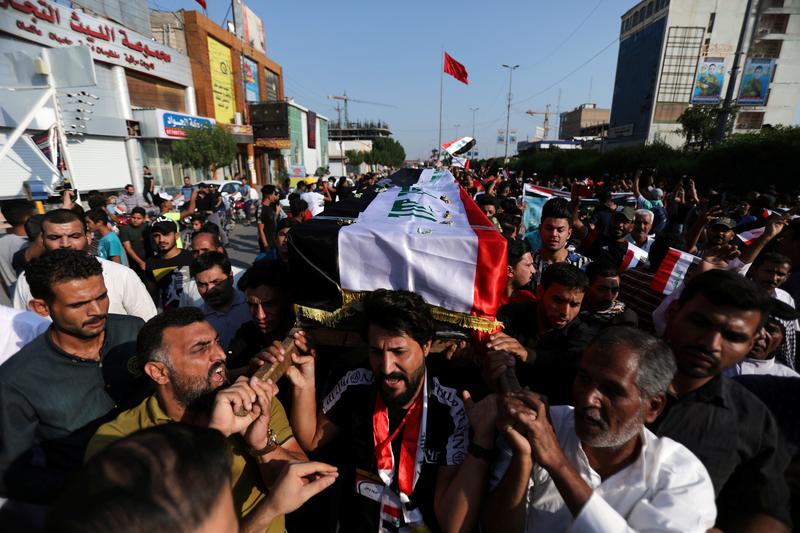 BAGHDAD (Reuters) – Iraqi security forces killed at least five people when they opened fire on protesters in Baghdad on Monday, a Reuters witness said, as thousands took part in the largest wave of anti-government protests for decades.

A Reuters cameraman saw one man shot dead, his body carried away by fellow protesters, when security forces opened fire with live rounds on demonstrators near Baghdad’s Ahrar Bridge. He also saw at least four others killed.

Security and medical sources put the toll at four killed and 34 wounded, but could only confirm one death was from live fire. Two were a result of rubber bullets and tear gas, not live ammunition, they said, giving no reason for the fourth death.

The sources also said two people were killed, including a police officer, when special forces tasked with protecting the heavily fortified Green Zone opened live fire on protesters. At least 22 people were injured.

A spokesman for the prime minister said a group of protesters had crossed the bridge and set fire to a restaurant, and that law enforcement “dealt” with them. He did not elaborate.

More than 250 Iraqis have been killed in demonstrations since the start of October against a government they see as corrupt and beholden to foreign interests.

Monday’s deaths were in addition to three protesters killed late on Sunday when security forces who opened fire on a crowd trying to storm the Iranian consulate in the Shi’ite Muslim holy city of Kerbala, security and medical sources said.

Thousands of anti-government protesters had gathered in central Baghdad on Monday, defying a plea by Prime Minister Adel Abdul Mahdi to stand down.

Since putting down an insurgency by Islamic State in 2017, Iraq has enjoyed two years of comparative stability. But despite its oil wealth, many people live in poverty with limited access to clean water, electricity, healthcare or education.

“The youth have lived through economic hardships, explosions, oppression. We want to root out this political elite completely,” said a protester who had camped overnight in Baghdad’s Tahrir Square. He asked that he not be identified.

Abdul Mahdi appealed to protesters on Sunday night to suspend their movement, which he said had achieved its goals and was hurting the economy.

Iraqi mourners carry the coffin of a demonstrator who was killed at anti-government protests, during a funeral, in the holy city of Kerbala, Iraq November 4, 2019. REUTERS/Abdullah Dhiaa al-Deen

He has said he is willing to resign if politicians agree on a replacement, and has promised a number of reforms. But protesters say that is not enough and the entire political class needs to go.

The political elite is seen by many as subservient to one or other of Baghdad’s main allies, the United States and Iran, foes who use Iraq as a proxy in a struggle for regional influence.

Since last Wednesday, protests have halted operations at Iraq’s main Gulf port Umm Qasr near the oil city of Basra.

Security authorities said they would begin arresting those blocking roads for denying other Iraqis access to crucial medicine and food.

Elsewhere in the south, at least 5,000 protesters gathered in the city of Diwaniya, blocking roads. Most government offices and schools were closed, police and local officials said.

ROOT OUT THE ELITE

The incident in Kerbala was the latest sign of anti-Iranian anger that has emerged during the biggest wave of demonstrations in Iraq since the fall of Saddam Hussein in a U.S.-led invasion.

Reuters reported last week that a powerful political party had contemplated withdrawing support for Abdul Mahdi but decided to keep him in power for now after holding a secret meeting in Baghdad attended by a general from Iran’s Revolutionary Guards.

Burning tyres and chanting “Iran out, Kerbala remains free,” the crowd assembled in front of the consulate late on Sunday. Iraq’s High Commission on Human Rights said the crowd tried to break into the consulate, while security sources said they tried to torch it.

The rights commission confirmed that three people were shot dead. A dozen more were wounded, including members of the security forces, it said.

Protesters see Iran as the main power behind the Shi’ite political parties that have wielded power in Iraq since the U.S.-led invasion.

The spread of anti-Iranian sentiment deep into Iraq’s Shi’ite heartland signals a broad discontent with Tehran’s interference, and Iraqi Shi’ites’ shifting priorities with sectarian identity taking a back seat to economic concerns.

“The Iranians and the parties affiliated with Iran harm us,” a Kerbala protester said. “No Iranian will remain in Kerbala or across Iraq.”