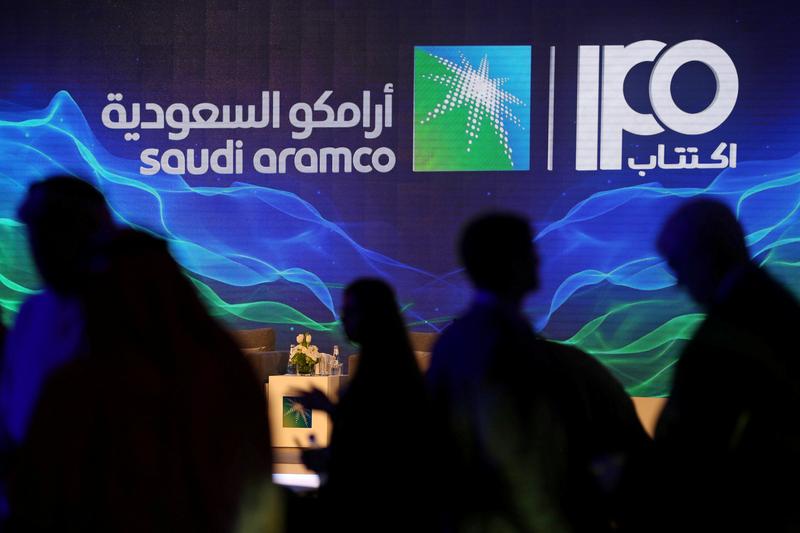 A sign of Saudi Aramco’s initial public offering (IPO) is seen during a news conference by the state oil company at the Plaza Conference Center in Dhahran, Saudi Arabia November 3, 2019. REUTERS/Hamad I Mohammed

DUBAI (Reuters) – Saudi Arabia’s state oil company kick-started its initial public offering (IPO) on Sunday, announcing its intention to list on the domestic bourse as the kingdom seeks to diversify and create the world’s most valuable listed company.

With Aramco likely to list 5% of the company over time (1% locally and 4% on an exchange abroad) at a hypothetical $1.5 – $2 trillion valuation, the offering could add up to 1.8 percentage points to its MSCI EM Index representation. This will bring the MENA region’s overall weighting close to 7%, putting it on par with the likes of Emerging Europe, Brazil, South Africa and India, a significant milestone in the evolution of MENA capital markets.

It is a colossal public offering that could potentially generate more than 10 years’ worth of proceeds raised through IPOs in the country. Some local investors could be selling other shares in order to shift their investments to Aramco and we have seen some ripple effects with the Tadawul All Share Index losing more than 20% from a recent high in early May. In our view, however, this could well be a case of short-term pain for long-term gain.

Aramco will have to offer a dividend yield of more than the international oil majors as it is not necessarily a profit maximiser and is more heavily swayed by national development and political objectives than other oil majors. Investor rule of law over Aramco is also weaker. A $75 billion dividend would therefore imply a valuation of well below $1.5 trillion, let alone $2 trillion. Whatever this local round achieves, with domestic players being strong armed into investing, international investors are still going to value this well below the expectations of (Crown Prince) Mohammed bin Salman.

The part-IPO is a cornerstone of Saudi Arabia’s transformation plan and a listing will be a high profile symbol of progress with the reform programme. From an economic perspective, it will provide funds to progress with the key megaprojects that are central to the transpiration plan, though the amount raised if 1-2% is listed is unlikely to make a significant dent in the capital requirement. The critical questions still remains the amount to be listed and the valuation.