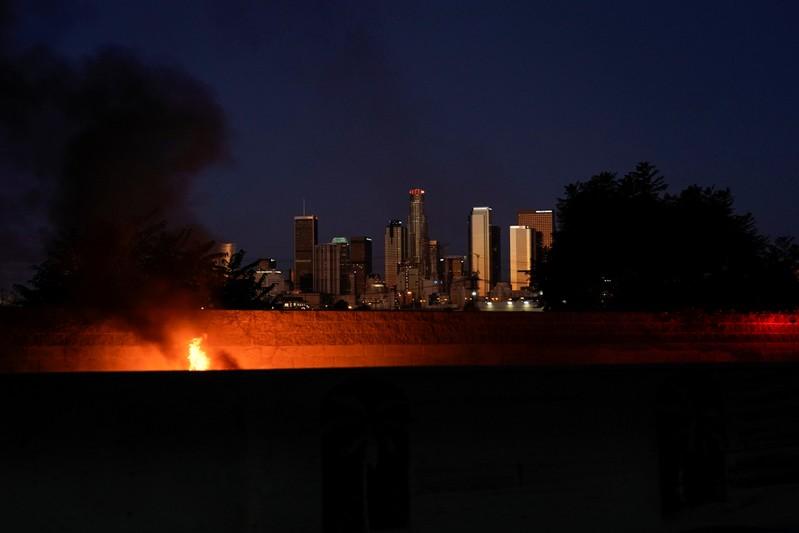 FILE PHOTO: A car burns after catching on fire along the side of the 101 highway in Los Angeles, California, U.S. November 1, 2019. REUTERS/ Mike Blake

(Reuters) – Firefighters working overnight to contain a Southern California wildfire made significant headway on Sunday, containing 50% of the blaze with the aid of cooler weather and lighter winds after it burned thousands of acres of dry brush and farmland.

The Maria Fire, which broke out on Thursday near the community of Santa Paula about USEN70 miles (110 km) northwest of downtown Los Angeles, had destroyed two structures and burned more than 9,400 acres (3,800 hectares), the Ventura County Fire Department said on Sunday.

“Overnight firefighters continued to patrol the fire perimeter extinguishing any remaining hot spots. Fire behavior was moderated due to cooler temperatures and lighter winds,” the department said in a statement.

All evacuation orders were lifted on Saturday, when the fire department said the blaze was 20% contained. More than 10,000 residents had been told to evacuate at the peak of the fire’s rapid spread.

Strong, dry desert winds have fueled the Maria Fire and a number of other destructive wildfires across the state this fall.

The largest blaze, the Kincade Fire in Sonoma County north of San Francisco, was 76% contained on Sunday after burning nearly 80,000 acres and destroying more than 370 structures since it started on Oct. 23, officials said.