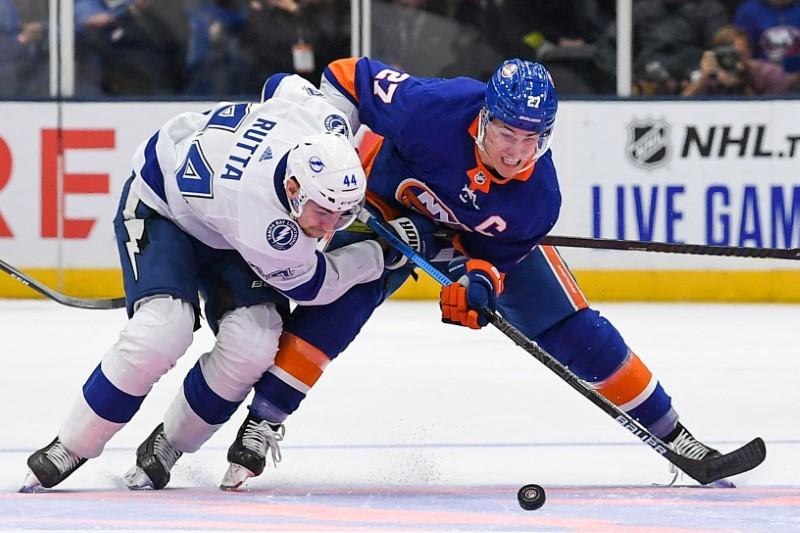 Captain Anders Lee collected a goal and two assists and the New York Islanders recorded their eighth straight win, a 5-2 victory over the Tampa Bay Lightning on Friday in Uniondale, N.Y.

Derick Brassard scored in his fourth straight game and joined Mathew Barzal and Josh Bailey with a goal and an assist for the Islanders, who last won eight in a row in a single season in 1989-90. Defenseman Ryan Pulock also tallied, and Thomas Greiss finished with 33 saves in the victory.

Yanni Gourde and defenseman Ryan McDonagh scored, and Andrei Vasilevskiy turned aside 21 shots for the Lightning, who have dropped three of their past four (1-2-1).

Barzal put his slick skating ability on display en route to opening the scoring at 4:58 of the second period, regaining control of a rebound off his own shot, skating in from the left-wing boards and wristing a shot that handcuffed Vasilevskiy and the puck slowly trickled over the goal line. Barzal has scored all of his team-leading six goals in his past seven games.

With the Blues opening overtime on a power play, Ryan O’Reilly won the faceoff and got the puck to Alex Pietrangelo, who skated with the puck into the Columbus zone. Pietrangelo sent a cross-ice pass to Perron, who fired in a shot from the right circle just as the power play expired.

Tom Wilson and Michal Kempny each recorded three points as Washington rode an early offensive outburst to an easy win over Buffalo in the nation’s capital.

Kempny recorded three assists for the first three-point game of his four-year NHL career. Wilson assisted on both of Jakub Vrana’s goals before collecting his fifth goal of the season. Brendan Leipsic had a goal and an assist. Travis Boyd also added two assists, and Chandler Stephenson and T.J. Oshie accounted for the Capitals’ two other goals.

Washington extended its winning streak to three games and now has a 7-0-1 record over its past eight games. The red-hot Capitals lead the NHL in both points (23) and goals scored (59), and are 12-3-0 in their past 15 games against the Sabres.

Sean Couturier scored the only goal of the shootout as Philadelphia edged New Jersey in Newark, N.J., after just missing out on a win in the closing seconds.

Claude Giroux nearly won the game as overtime was in its final seconds, but the rebound of his shot was shoveled out of the crease by the Devils’ Jesper Bratt.

Oskar Lindblom, Couturier and Joel Farabee scored in regulation for the Flyers, who snapped a two-game losing streak. Goalie Carter Hart recorded 23 saves before turning back all three shots he faced in the shootout.

Nikolaj Ehlers scored the go-ahead goal at 18:36 of the third period, and Connor Hellebuyck made 51 saves as Winnipeg defeated host San Jose.

Gabriel Bourque and Blake Wheeler also scored for the Jets, who got back to .500 (7-7-0) despite star forward Patrik Laine missing his second consecutive game due to a lower-body injury.

Barclay Goodrow and Tomas Hertl scored for the Sharks, who took their fourth consecutive defeat and sixth in seven games. Goalie Martin Jones stopped 16 of 19 shots.

MacKinnon had a goal and Philipp Grubauer had 27 saves for the Avalanche, who have lost three straight and finished their homestand 0-2-1. MacKinnon’s streak is the longest point streak to start the season by an Avalanche skater and the fourth longest in club history (including when the franchise was the Quebec Nordiques).

Andrei Svechnikov, Nino Niederreiter, Martin Necas, Brock McGinn and Teuvo Teravainen also scored for the Hurricanes. Dougie Hamilton and Jaccob Slavin each supplied three assists, while Aho made it a three-point night with one assist. Petr Mrazek made 29 saves.

Anthony Mantha scored twice for the Red Wings, while Tyler Bertuzzi also scored. Andreas Athanasiou notched two assists for Detroit, which has won only once in its past 10 games. Jimmy Howard allowed five goals on 21 shots before he was pulled late in the second period. Jonathan Bernier picked up 11 saves on 12 shots.

Ryan Getzlaf took a long outlet pass from Troy Terry and scored 2:30 into overtime as Anaheim cooled off high-scoring Vancouver in Southern California.

Jakob Silfverberg scored a short-handed goal and John Gibson made 39 saves as the Ducks improved to 6-1-0 at home. The Canucks had their chances, putting 40 shots on goal to 29 by the Ducks. The Ducks also turned back the Canucks’ lethal power play, killing off Vancouver’s man advantage five times.

The game-winner was the seventh goal of the season for Getzlaf, and it came in his 999th career game with the Ducks. The Canucks entered with four victories in their past five games, having scored 25 goals in that stretch. Adam Gaudette scored their goal.