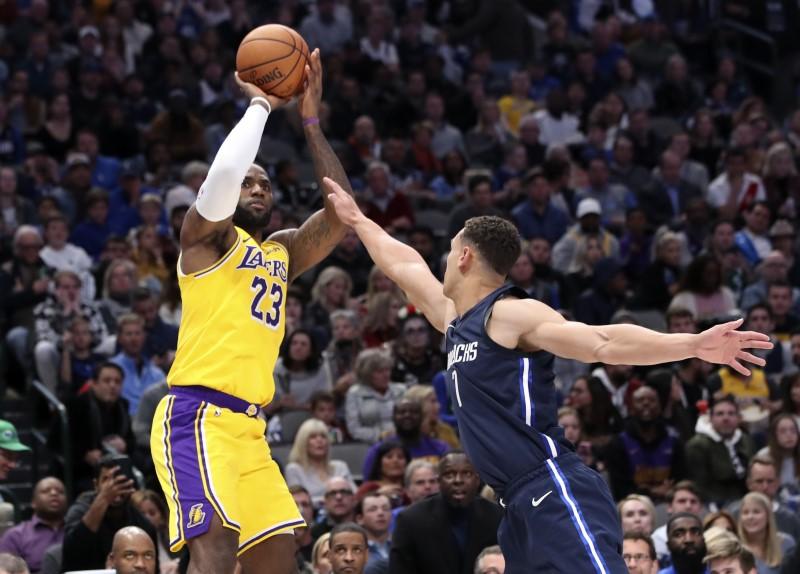 LeBron James had 39 points, 16 assists and 12 rebounds, and the Los Angeles Lakers rallied to defeat the host Dallas Mavericks 119-110 in overtime on Friday night, the Lakers’ fourth win in a row.

James, who also had four steals, connected on 13 of 23 shots from the floor, including 4 of 9 from 3-point range. Anthony Davis scored 31 points and grabbed eight rebounds for the Lakers, who overcame a 15-point deficit. Danny Green had 14 points, including a 3-pointer at the buzzer to force overtime.

Luka Doncic also recorded a triple-double, finishing with 31 points, 15 assists and 13 rebounds for the Mavericks. Kristaps Porzingis chipped in 16 points and nine rebounds, while Dwight Powell had 14 points.

Lakers forward Kyle Kuzma made his season debut, scoring nine points in 19 minutes. He had been out due to a left ankle injury.

The Nets improved to 2-3 and rebounded nicely from Wednesday’s 10-point loss to Indiana by outscoring Houston 93-71 over the final 32:31.

Caris LeVert added 25 points for the Nets, who shot 49.4 percent while not being led in scoring by Kyrie Irving for the first time this season. Irving finished with 22 points and 10 assists to post his first double-double as a Net.

Giannis Antetokounmpo notched a double-double and Milwaukee used a big second quarter to breeze past host Orlando in the first meeting between the teams this season.

The Bucks outscored the hosts 31-14 in the second quarter en route to a 62-41 halftime lead. Antetokounmpo tallied 29 points, 14 rebounds and six assists for Milwaukee, which bounced back after Wednesday’s 116-105 loss in Boston.

Evan Fournier recorded 19 points and Nikola Vucevic had 14 for the Magic, who have lost three of four and are 1-1 on their three-game homestand. Milwaukee outscored Orlando 36-2 on fast breaks.

Jayson Tatum countered a game-tying 3-pointer by Marcus Morris by sinking a 21-footer with 1.3 seconds remaining, allowing host Boston to outlast New York in a game that saw neither team lead by more than seven points.

The Celtics’ Kemba Walker led all scorers with 33 points, who won their fourth straight after a season-opening loss at Philadelphia. Tatum added 24 points, Gordon Hayward 13 and Grant Williams 10.

Morris hit five 3-pointers, including three in the final four minutes, and finished with 29 points to lead the Knicks, who completed a two-game road trip that began with a 95-83 loss at Orlando on Wednesday. RJ Barrett had 15 points, Bobby Portis 13, Kevin Knox II 12 and Frank Ntilikina 10 for New York.

Pistons guard Derrick Rose came off the bench to score 23 points on 8-for-13 shooting in his return to Chicago, where he won a Most Valuable Player award during the 2010-11 season. Pistons center Andre Drummond had another monster performance in the paint with 25 points and 24 rebounds in 35 minutes.

Patty Mills scored five of his game-high 31 points in a 10-0 burst late in the third quarter as San Antonio finally broke free from Stephen Curry-less Golden State in San Francisco.

After earlier in the day announcing that Curry is likely to miss three months after undergoing surgery on his broken left hand, the Warriors led San Antonio in the second minute of the third quarter and hung within 83-79 with 3:20 remaining in the period before the Spurs took charge.

Mills, a former star at nearby Saint Mary’s College, shot 6-for-9 on 3-point attempts en route to his season-best point total for the Spurs, who were coming off a 103-97 road defeat to the Los Angeles Clippers on Thursday night. The 31 points were the third most of Mills’ career. He had 34 at Golden State in its Oakland-based days in 2012, then 32 at Charlotte two years later.

Harrison Barnes scored on a putback with 2.9 seconds left to lift Sacramento to a home win over Utah Jazz for their first victory of the season.

Nemanja Bjelica launched a corner 3-pointer with less than five seconds left that missed, but Barnes was positioned well to get the rebound and make the basket to put a halt to the Kings’ season-opening five-game losing streak.

The Pacers earned their second consecutive win after an 0-3 start, which included a loss to Cleveland six days earlier. A strong second quarter erased a rough start for Indiana, which scored just 19 points in the opening period. Coach Nate McMillan, who didn’t have Myles Turner because of an ankle injury, started T.J. Leaf instead.

Indiana came out sluggish, and its 3-point shooting never improved: The Pacers shot just 18.5 percent (5-of-27) from deep. Justin Holiday, who scored eight points off the bench, was the only Pacer to make more than one 3-pointer.