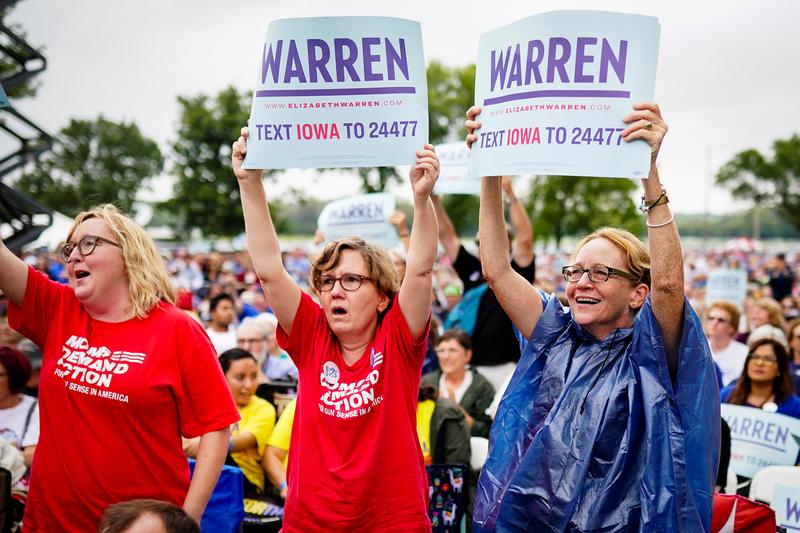 DES MOINES, Iowa (Reuters) – A parade of Democratic presidential hopefuls vowed on Friday to oust Republican Donald Trump from the White House in 2020, promising a raucous crowd in Iowa they would lead the fight to fulfill longtime party goals like ending income inequality and providing universal healthcare.

Standing alone on a podium-free stage in the middle of a basketball arena, the candidates urged more than 12,000 roaring Democrats to think about what kind of candidate they want to choose to lead the party in the November 2020 election.

The dinner, a rite of passage in the state that kicks off the White House race and at times a launching pad for successful candidates, came as Warren moved to the top of some polls in Iowa, passing former Vice President Joe Biden.

Pete Buttigieg, mayor of South Bend, Indiana, and U.S. Senator Bernie Sanders are also battling for the top in polls in Iowa, which kicks off the race to find a Democratic challenger to Trump on Feb. 3.

Warren, under fire from critics for failing to explain how she would pay for her government-run Medicare for All plan, unveiled details earlier in the day of a $20.5 trillion plan she said would not require raising middle-class taxes “one penny.”

Biden indirectly cast doubt on that idea, touting his rival proposal to build on President Barack Obama’s signature Affordable Care Act with a government-run option. He added pointedly he would do it “without taxing the middle class.”

Buttigieg plugged his “Medicare for All Who Want It” plan, which would make a government-run plan available, and said it would make it “your decision whether and when you want it.”

Warren, a leader of the party’s progressive wing, criticized candidates who “nibble around the edges” and said they would not be able to win the White House.

“Anyone who comes on this stage and tells you to dream small and give up early is not going to lead our party to victory,” she said.

The decades-old dinner gave candidates a chance to showcase their grassroots support and organizational muscle, packing the hall with cheering, chanting supporters who tried to drown out their rivals.

The event, previously known as the Jefferson-Jackson dinner, is most famous for a 2007 speech and display of organizational muscle from Barack Obama that helped launch him past rival Hillary Clinton to victory in Iowa and ultimately to the White House in 2008.

In 2003, John Kerry’s speech helped him right his struggling campaign and begin a comeback that ultimately made him the Democratic nominee before he lost the election in 2004 to Republican President George W. Bush. In 1975, little-known Jimmy Carter began his run to the White House with a victory in an informal straw poll held at the dinner.

A steady, cold rain dampened but did not extinguish the enthusiasm of supporters outside the arena before the dinner, with many arriving in the early morning hours to set up signs and begin chanting at passing cars and pedestrians.

Sanders led what his campaign said was a crowd of more than 1,500 on a “March to End Corporate Greed” outside the event. Buttigieg brought in singer-songwriter Ben Harper for a rally before his supporters paraded to the hall with a marching band.

“Even as we shiver, there is joy,” Buttigieg told the rain-drenched crowd. “Are you ready to go in that hall and leave no question about who has the momentum right now?”

Former Congressman Beto O’Rourke, scheduled to speak at the dinner, dropped out earlier in the afternoon but his campaign ads still appeared on the televisions in the arena concourses. O’Rourke joined his supporters outside the arena to thank them.

“I’m so grateful I got to run this campaign with you,” he said. “We have to clearly see at this point that we do not have the means to pursue this campaign successfully.”