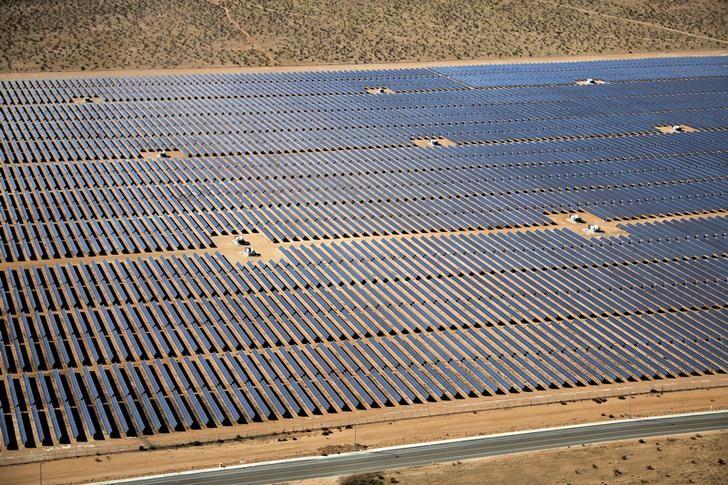 FILE PHOTO: An array of solar panels is seen in the desert near Victorville, California, U.S. March 28, 2018. REUTERS/Lucy Nicholson

The fires, driven by howling seasonal winds, have forced California power utility PG&E to cut electricity here to millions of people to prevent its transmission lines from touching off new blazes. PG&E said such outages, which reveal the vulnerabilities of the state’s traditional above-ground grid to wild weather, might be unavoidable over the next decade while the grid is upgraded.

“Demand is quite high for solar right now,” SunPower Corp Chief Executive Tom Werner said in an interview. “The first step toward taking control of your energy is to generate solar energy and then the next step is to get a battery.”

Werner said SunPower has seen a 20% increase in rooftop system sales this quarter he believes are related to the fires. EnergySage, a website that provides solar installation quotes, cited a 122% jump in the number of people in PG&E’s service territory registering for its service on Oct. 28 alone compared to this year’s weekday average.

Other companies hoping to tap the increased demand are offering discounts and expanding their outreach.

Tesla Inc CEO Elon Musk announced a $1,000 discount earlier this week via Twitter, while Sunrun Inc spokesman Shane Levy said the San Francisco-based installer has been offering a similar promotion for the last month. Levy added that traffic to its website hit record levels this month.

Solaria, a California-based solar panel manufacturer, has also introduced a discount of 2% to 5% for California installers who put up its product. Demand for battery storage has grown around 30% to 40% in areas affected by the outages, CEO Suvi Sharma said.

Tesla and Korea’s LG Chem Ltd are among the top home battery suppliers in the United States, whose ranks are growing. SunPower is introducing its own branded battery products, as is Enphase Energy Inc, which makes inverters that convert energy from solar panels for home use.

Batteries are crucial in combating power outages, several of the companies said, because most home solar systems in California are linked to the grid and are designed to shut down during blackouts to protect utility workers repairing lines.

Paired with a battery, solar power can be stored during the day and used to keep appliances running after sunset, or during outages. So far high battery prices, of about $5,000 to $7,000 according to EnergySage, has limited growth.

Rather than cutting prices, regional solar and battery installer Petersen-Dean is boosting its business in California, CEO Jim Petersen said. It has moved about 200 employees from areas with lower demand, such as Nevada and Arizona, to California to design, permit and install solar and battery systems, he noted.

Petersen-Dean expects to sell 750 batteries in October, compared with the monthly tally of about 150 earlier this year, Petersen said.

The outages have affected affluent parts of California that can afford solar and battery systems to keep their electric vehicles charged and wine cellars cold, he said.

“When their power is out they are not saying, ‘What can I save?’ They are saying, ‘How can I move to the front of the line?’”

While it is too soon to say whether the increased web traffic and price cuts will translate into a sales boom, solar players expect the wildfires and outages to underpin growth beyond this fire season. The Santa Anna winds come every autumn.

“People will soon be preparing for next year,” Werner said.