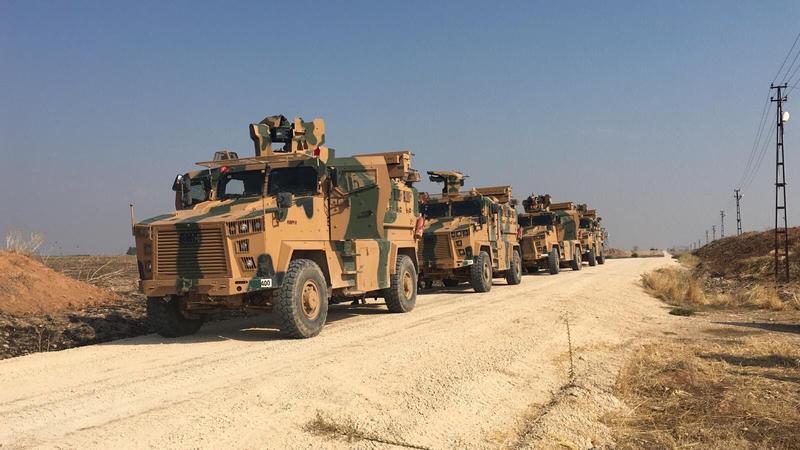 SEVIMLI, Turkey (Reuters) – Turkish and Russian troops in armored vehicles held their first joint ground patrols in northeast Syria on Friday under a deal between the two countries that forced a Kurdish militia away from territory near Turkey’s border.

Turkish military vehicles are seen on the Turkish-Syrian border before a joint Turkish-Russian patrol in northeast Syria, near the Turkish town of Kiziltepe in Mardin province, Turkey, November 1, 2019. Turkish Defence Ministry/Handout via REUTERS

Turkey and allied Syrian rebels launched a cross-border offensive on Oct. 9 against the Kurdish YPG militia, seizing control of 120 km (75 miles) of land along the frontier.

Last week, Ankara and Moscow agreed to remove the militia fighters to a depth of at least 30 km (19 miles) south of the border and Russia has told Turkey that the YPG left the strip.

Turkish armored vehicles on Friday drove through country roads across the border to join their Russian counterparts, according to Reuters television footage filmed from the Turkish side of the border. Around four hours later, they returned to Turkey, the footage showed.

Ground and air units were involved in the patrol in the area of the Syrian border town of Darbasiya, the Turkish Defence Ministry said on Twitter, showing photos of soldiers studying a map and of four armored vehicles.

On Wednesday, President Tayyip Erdogan said Turkey had information that the YPG, which Ankara sees as a terrorist group because of its ties to Kurdish militants fighting an insurgency in southeast Turkey, had not completed its pullout.

Russia is the Syrian government’s most powerful ally and helped it turn the tables in the country’s civil war by retaking much of the country from rebels since 2015. The Turkish-Russian deal last week allowed Syrian government forces to move back into border regions from which they had been absent for years.

Four Russian vehicles and a drone also took part in Friday’s patrol, conducted in an area between 40 km east of Ras al Ain and 30 km west of Qamishli, a Turkish security source said.

The source said patrols would extend further along the border strip and that drones would be used to ensure that YPG fighters had left the area.

The source also said there had been no direct clashes with Syrian government forces during the incursion and that Ankara was coordinating with Moscow to avoid “undesired clashes.”

Overnight, the defense ministry said Turkey had handed over to the Russians 18 Syrian government soldiers detained in Syria near the Turkish border this week. It said the move was coordinated with Russia but did not say who they were handed to.

The 18 men were seized on Tuesday during operations southeast of the Syrian town of Ras al Ain, part of an area where Turkey’s incursion took place, stretching some 120 km (75 miles) along the border to the town of Tel Abyad.

Erdogan said on Thursday night that Turkey planned to establish a “refugee town or towns” in a “safe zone” between Tel Abyad and Ras al Ain, part of a project which state media have said would cost 151 billion lira ($26 billion).

He met U.N. Secretary-General Antonio Guterres on Friday morning and had said he would ask him to call for a donors’ meeting to help finance Ankara’s plans for the resettlement of Syrian refugees in the region.

“I will say: ‘You make a call for an international donors’ meeting. If you don’t, I will make this call’,” Erdogan said in Thursday’s conference speech. It was not immediately clear whether he made the request to Guterres on Friday.

“If it doesn’t happen, we will establish a refugee town or towns between Tel Abyad and Ras al Ain,” he said, addressing a building contractor in the hall and saying he would ask him to play a role in the project.

Ankara has said it plans to resettle in Syria up to 2 million of the 3.6 million Syrian war refugees that it hosts.

According to plans which Erdogan presented at the United Nations General Assembly in September, Turkey would resettle some 405,000 people between Tel Abyad and Ras al Ain.

Erdogan said leaders at the General Assembly had looked positively on the plans but declined to offer money.

“We have for years hosted millions of refugees in our lands. The support we have received from the international community has unfortunately just been advice,” he said.

“The mentality that regards a drop of oil as more valuable than a drop of blood does not see anything but its own interest in Syria and everywhere in the world.”