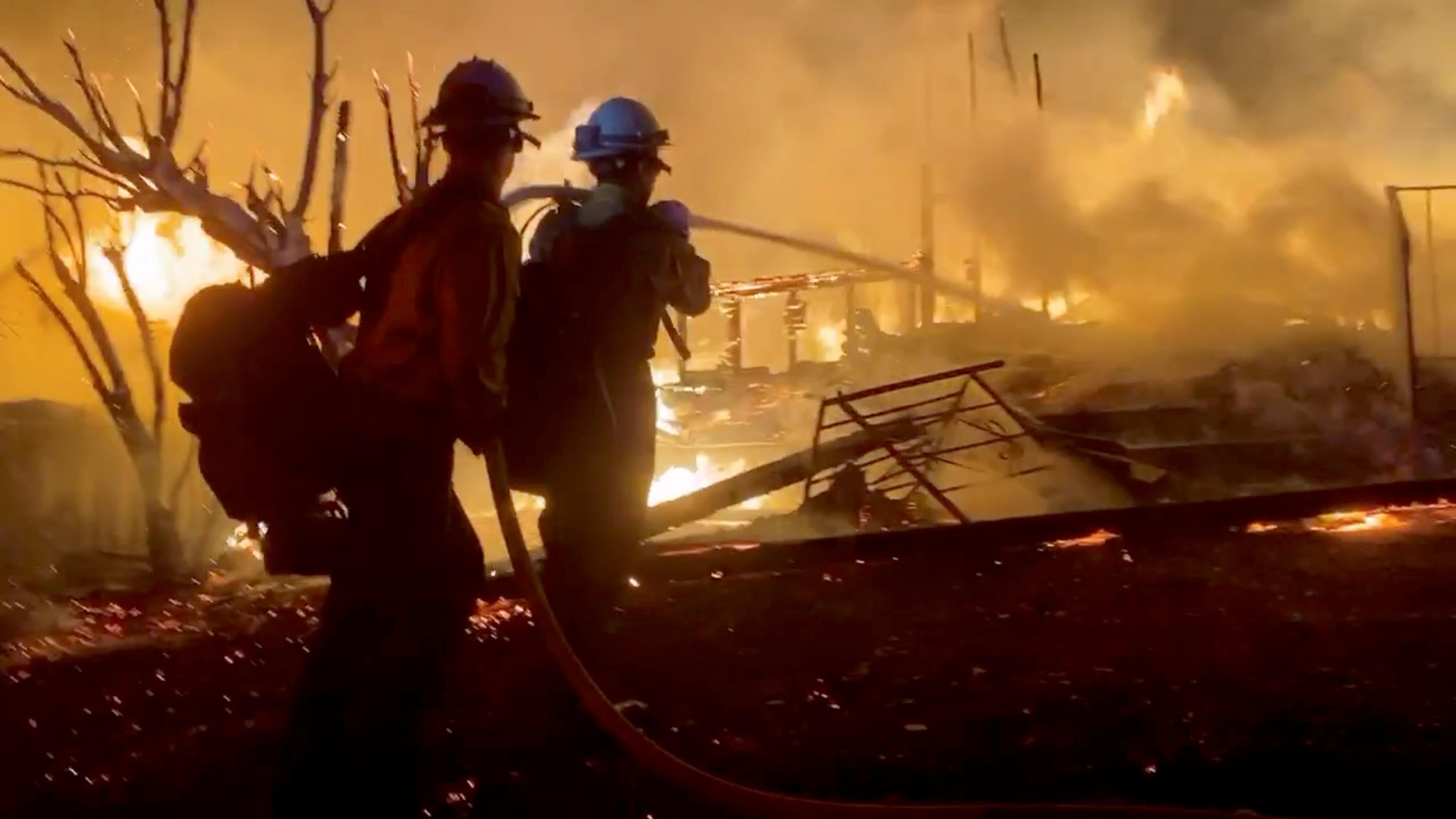 LOS ANGELES (Reuters) – A fast-moving scrub fire threatened orchards, oil fields and homes while displacing thousands of residents in Southern California on Friday, even as diminishing winds helped fire crews tame a rash of wildfires elsewhere across the state.

The latest in a spate of conflagrations that have kept California firefighters on the go for weeks roared to life on Thursday evening near the hilly farm community of Santa Paula, about 70 miles (112.65 km) northwest of Los Angeles.

As the Maria fire spread to 8,700 acres (3,520 hectares) of dry brush and chaparral, firefighters scrambled to protect valuable citrus and avocado crops in harm’s way, as well nearby oil industry infrastructure.

The blaze also threatened high-voltage power lines in the vicinity, along with radio and communications towers at the top of a large hill called South Mountain, where the flames originated, Ventura County fire officials said.

By noon on Friday, the fire was threatening 2,300 homes and other structures, with about 8,000 people under evacuation orders, Sheriff Bill Ayub told a news conference. Dozens of schools were closed for the day.

No injuries or structural damage were reported, but local media said some orchard trees had been burned.

Jail personnel and more 750 inmates of a county lockup near the evacuation zone were “sheltering in place” for the time being, as flames did not pose an immediate threat to the facility, the sheriff said.

The fire erupted just as fierce Santa Ana desert gusts had begun to subside after howling across much of Southern California for two days. But strong, erratic winds were expected to persist through Saturday in many mountainous and foothill areas, including the Santa Paula fire zone.

Elsewhere, subsiding winds helped firefighters gain control of several fires in the region that had broken out earlier.

Just 30 miles (48.28 km) to the east in Simi Valley, a blaze that raged to the edge of the hilltop Ronald Reagan Presidential Library on Wednesday was 60% contained on Friday, while containment on a separate fire that had threatened the Getty Center art museum and thousands of homes in west Los Angeles on Monday was listed at 66% contained.

East of Los Angeles, the 200-acre (80-hectare) Hillside fire that burned several homes early on Thursday in the north end of San Bernardino was 70% contained by Friday.

The latest recurrence of seasonal Santa Ana winds coincided with extremely low relative humidity levels and a prolonged lack of rainfall that has left vegetation tinder-dry in the region.

While causes of all the latest fires remain under investigation, wind-related damage to power lines has been implicated in a number of major California blazes, including the Getty fire.

Pacific Gas and Electric Co (PCG.N) acknowledged last week that the Kincade Fire, which charred 77,000 acres (31,160 hectares) of Sonoma County wine country north of San Francisco, started last week near a damaged PG&E transmission tower at about the time a high-voltage line on that tower malfunctioned.

That blaze, which destroyed at least 349 homes and other structures, was listed as 65% contained on Thursday evening.

PG&E, which over this past weekend began shutting off power to 940,000 California customers to reduce the risk of an electrical mishap sparking a blaze, said late on Thursday it had restored electricity to virtually all customers.