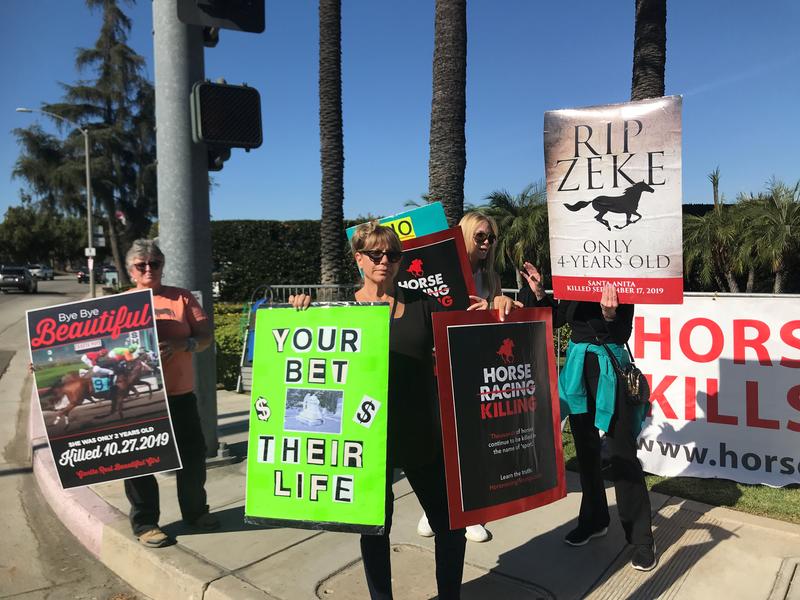 (Editor’s note: Contains language that may offend some readers)

ARCADIA, Calif. (Reuters) – Horse racing is animal cruelty and should be banned, protesters who greeted patrons on the first day of the Breeders’ Cup at Santa Anita Park said on Friday.

“We’re going to shut this shit down,” Heather Wilson, an animal rights activist with Horseracing Wrongs, told Reuters while standing with two dozen other sign-wielding protesters near the entrance to the race track.

“We want to see an end to this blood sport.”

Thirty-six horses have died at the famed Southern California race track since late December last year, shining a spotlight on the sport and ramping up calls for reform.

The protest group say roughly 2,000 horses die every year at U.S. race tracks, although the industry says that figure is inflated.

Wilson held a picture of G Q Covergirl, a mare who was euthanized last week after she injured her front two legs during a training run at Santa Anita.

Wilson said she supported a two-year phase-out of the sport in California, similar to what Florida had done with dog racing which will be discontinued by the end of 2020 after voters there approved a measure in 2018.

“We understand it can’t be shut off like a switch, it will have to be phased out. Two years is reasonable.”

Horse racing proponents argue that while horse deaths will never be entirely eliminated, the industry cares deeply for the animals and tracks such as Santa Anita have implemented reforms around the misuse of drugs, a major culprit in breakdowns.

“These people do not care about these horses,” she said.

“These horses change hands, they change owners numerous times throughout their so-called careers.”

The spate of deaths at Santa Anita has given momentum to the Horseracing Integrity Act, federal legislation that would ban race-day drugs and set up a national anti-doping authority, but Wilson said the bill was not the answer.

“It’s nonsense. It’s just going to prolong the agony and prolong the suffering,” she said.

“There is no integrity in horse racing. These animals are confined 23 hours a day. They are whipped, they are drugged, they are forced to train at 18 months and they are racing them at two years of age.

“They are babies and the Horse Racing Integrity Act isn’t going to fix any of that.”

Wilson said public perception of the sport was changing and noted that 34 race tracks in the U.S. had closed since 2000.

“Using and abusing animals for entertainment is just becoming passé,” she said, adding that she was also working to end rodeos.