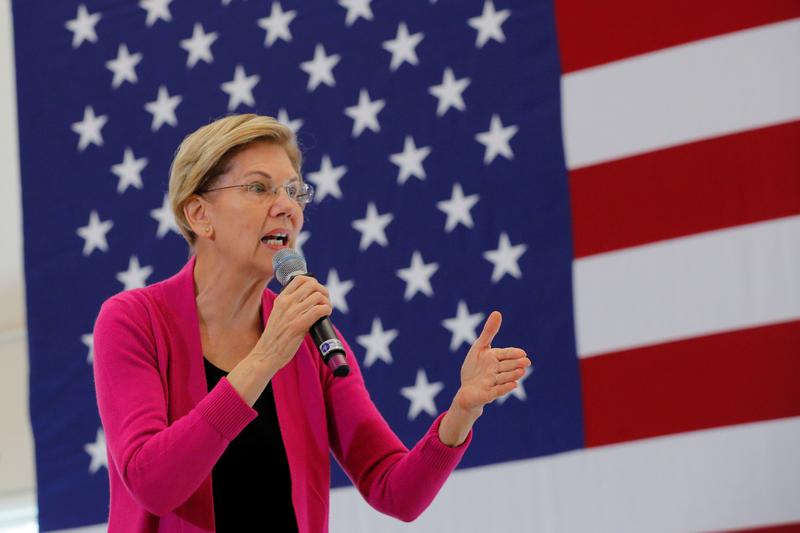 NEW YORK/WASHINGTON (Reuters) – Democratic U.S. presidential candidate Elizabeth Warren proposed on Friday a $20.5 trillion Medicare for All plan that she said would not require raising middle-class taxes “one penny,” answering critics who had attacked her for failing to explain how she would pay for the sweeping healthcare overhaul.

The long-awaited plan would save American households $11 trillion in out-of-pocket healthcare spending over the next decade, Warren said, while imposing significant new taxes on corporations and the wealthy to help finance the new system.

Warren’s plan also calls for cuts in defense spending and passing immigration reform that would increase tax revenue from newly legal Americans, two steps that would face an uphill battle in Congress. The $20.5 trillion in new spending over 10 years would increase the entire federal budget by a third.

“Healthcare is a human right, and we need a system that reflects our values,” Warren wrote in a 20-page essay outlining her plan. “That system is Medicare for All.”

Warren, a U.S. senator from Massachusetts, is one of 18 Democrats vying for the party’s nomination to take on Republican President Donald Trump in the November 2020 election. She is near the top of the pack in opinion polls, having closed in on former Vice President Joe Biden, the early front-runner.

Medicare for All would replace private health insurance, including employer-sponsored plans, with full government-sponsored coverage, and individuals would no longer have to pay premiums, deductibles, co-pays or similar out-of-pocket costs. Long-term care would also be covered.

It would extend Medicare, the U.S. government’s health insurance program for people 65 years and older and the disabled, to cover all Americans, including at the roughly 27.5 million – 8.5 percent of the population – who are currently uninsured.

Warren, a former law professor, has become known for a bevy of detailed policy proposals. But she had faced criticism from some Democratic rivals for not outlining precisely how she would pay for a Medicare for All plan she backs that was introduced in the U.S. Senate by rival Democratic candidate Bernie Sanders of Vermont.

At recent debates, Warren had refused to answer directly when asked whether she would raise middle-class taxes to cover the costs, even as Sanders acknowledged that he would, without providing details.

Friday’s sweeping proposal is intended to rebut critics, but it could also lead to new scrutiny from both Democrats and Republicans as they comb through the details. The plan relies on aggressive ways to lower healthcare costs, including major cuts in prescription drug prices.

Critics like Warren note that the current healthcare system in the United States – a patchwork of private insurance often provided by employers or obtained through Obamacare marketplaces and public programs covering the poor, elderly and disabled – is the most expensive in the world despite leaving tens of millions with no coverage.

Medicare for All legislation stands little chance of passing the U.S. Congress even if Democrats succeed in taking control of both chambers as well as the presidency, given the skepticism among some moderate Democrats and the opposition of Republicans. Democrats control the House. Republicans control the Senate.

Warren said she would finance the plan largely through money from businesses and the wealthy. Employers essentially would be asked to transform the money they currently spend on workers’ healthcare into Medicare contributions, while billionaires, high-earning investors and corporations would face higher taxes.

Biden’s campaign questioned Warren’s calculations, calling them “double talk” and asserting that middle class taxes would rise despite her vow.

“The mathematical gymnastics in this plan are all geared toward hiding a simple truth from voters: it’s impossible to pay for Medicare for All without middle-class tax increases,” said Kate Bedingfield, Biden’s deputy campaign manager. “To accomplish this sleight of hand, her proposal dramatically understates its cost, overstates its savings, inflates the revenue, and pretends that an employer payroll tax increase is something else.”

Warren released two letters supporting her calculations from several health policy and economic experts, including: Simon Johnson, the former chief economist for the International Monetary Fund; Donald Berwick, who ran Medicare and the Medicaid healthcare program for the poor in the Obama administration; and Mark Zandi, the chief economist at Moody’s Analytics.

An online calculator launched by Warren’s campaign showed an average family of four with employer-provided insurance would save $12,378 per year.

More moderate 2020 candidates such as Biden and South Bend, Indiana, Mayor Pete Buttigieg have said Medicare for All would be too expensive and disruptive. They favor a more incremental approach.

Warren said with her Medicare for All plan in place, projected total healthcare costs in the United States over 10 years would be just under $52 trillion – slightly less than maintaining the current system.

Reporting by Amanda Becker and Joseph Ax; Editing by Colleen Jenkins and Will Dunham