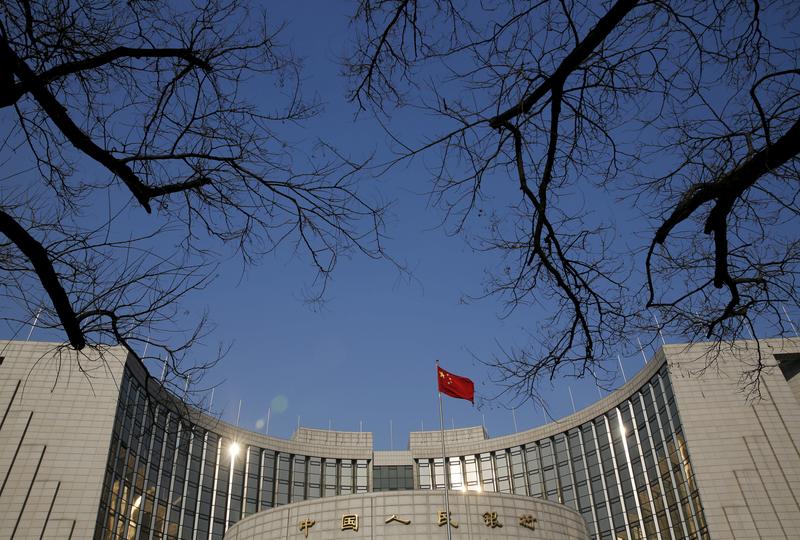 SHANGHAI (Reuters) – As China prepares to become the first country to launch a digitized domestic currency, market participants and experts say it is a testament to both financial innovation and Beijing’s desire to have fail-safe control over its cash economy.

China’s central bank has revealed few specifics of its Digital Currency Electronic Payment (DCEP) project, one that’s been five years in the making, though more details have trickled out over the past few weeks in the bank’s presentations on the subject.

Akin to Facebook’s proposed Libra digital currency and other cryptocurrencies such as bitcoin, the DCEP will be powered partially by blockchain technology and dispersed through digital wallets.

What sets it somewhat apart, however, are features that allow the central bank to track the movement of the currency and even supervise transactions.

The digital currency’s design seemingly provides Beijing with unprecedented oversight over money flows, giving Chinese authorities a degree of control over their economy that most central banks do not have.

The main motivation behind the project, market observers say, is China’s desire to protect its capital borders in the face of fears that newer global payment systems and advanced technology could facilitate illegal cash flows.

“There’s a consensus around the world among central bank governors and governments at large that they want to have control of money and money supply and the seigniorage that comes along with it,” said Keyu Jin, professor of economics at the London School of Economics on the sidelines of a forum in Singapore.

“But over-obsessive control and governance is probably more unique to China than anything else.”

So far, Beijing has sent mixed messages on how soon the digital currency will be launched.

The head of the Chinese central bank’s digital currency research institute, Mu Changchun, told a public forum in August that it was “almost ready”. However, in September, Chinese central bank chief Yi Gang said there was no timetable for its rollout and that it still needed to meet requirements, such as anti-money laundering.

Authorities have, however, made no bones about their disapproval of Facebook’s Libra, labeling it a threat to the sovereignty of China and other emerging economies and insisting that digital currencies should only be issued by governments and central banks.

Mu hinted at these fears and desire to preserve control in his lectures. “Just imagine, if we acquiesce, that yuan can be converted into Libra, there will definitely be a massive currency exchange, triggering yuan depreciation.”

The People’s Bank of China (PBOC) did not immediately reply to Reuters questions on its digital currency plans.

More than 50 patents filed by the PBOC and Mu’s comments indicate that the PBOC plans to distribute the digital currency through commercial banks, much like how it does currently with physical yuan.

It will thereafter follow a model familiar to most users of systems such as Apple Pay and Chinese payment system Alipay, requiring commercial banks to distribute the cash via digital wallets that can be downloaded on phones.

But unlike physical cash, one patent filed shows that the bank is exploring a tracking system that would make the digital currency’s movements traceable between transactions and people.

Mu said the DCEP also would strike a balance between allowing anonymous payments and “classified supervision” to prevent illegal activity such as money-laundering, with authorities able to monitor such instances via big data recognition.

As an example, Mu said, telephone fraud tended to be characterized by large, fragmented sums of money suddenly being deposited into one bank account for a short while before swiftly scattering and disappearing into multiple bank accounts.

“Once we analyze these transactions, use big data and data mining technology and conduct identity comparisons, we will be able to find the culprits.”

So far, there has been little public reaction in a country already used to weak privacy protections and a high degree of government digital surveillance of its people.

The few public discussions on Chinese social media platforms such as Weibo have expressed mixed views, with some saying that it could prevent corruption. However, one user asked: “What will happen to my freedom to build wealth, my secrets and safety?”

A Union Pay official told Reuters that the PBOC was likely to have to overcome resistance from parties such as lenders thanks to its potential to revamp the existing banking system.

“Theoretically, with digital currency, you could do away with bank accounts,” he said. “The launch is more about politics than technology.”

Despite the uncertainty over its launch, the lectures by Mu and subsequent revelations have heightened anticipation in China and globally.

“The PBOC has been studying the DCEP for five or six years, and I believe it has reached a level of maturity,” Huang Qifan, vice chairman of Beijing-backed think tank China Center for International Economic Exchange, told a finance forum on Monday.

“China will likely be the first country in the world to issue sovereign digital currency.”