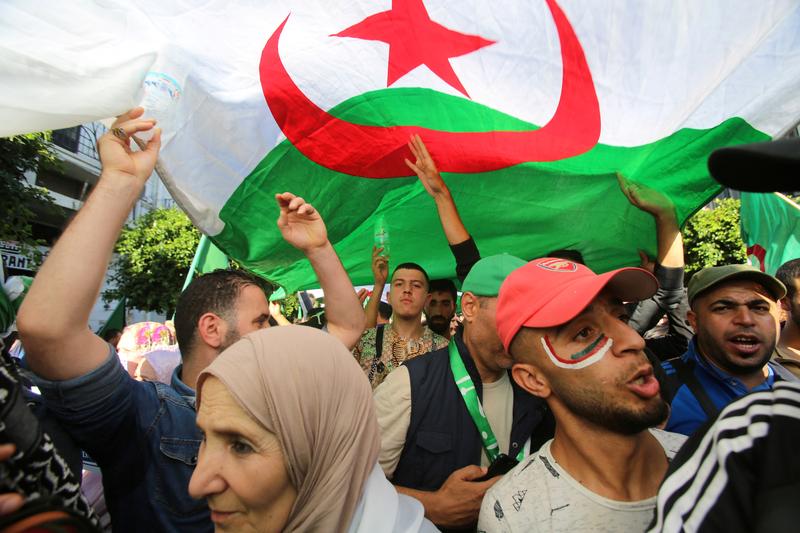 ALGIERS (Reuters) – More than 100,000 Algerians, double the number attending recent weekly protests, marched on Friday to demand a purge of the ruling hierarchy and an end to military involvement in politics.

Demonstrators gesture and carry national flags during a protest against the country’s ruling elite, on the anniversary of the 1954 revolution against French colonial rule, in Algiers, Algeria November 1, 2019. REUTERS/Ramzi Boudina

The surge in numbers came after opposition calls on social media for a big demonstration to mark the anniversary of the 1954 uprising against French rule, the start of a struggle for independence whose cadres still dominate Algerian politics.

Algeria, the largest country in Africa, is a major exporter of oil and gas.

Friday’s protest comes as the leaderless opposition movement readies for a test of strength with the authorities after rejecting a presidential election that has been called for December and is seen by the army as the best way to end the impasse.

The mass protests erupted in February after veteran president Abdelaziz Bouteflika said he would stand for president again in a July election and continued weekly even after he stood down in April.

Since the spring, the number of protesters attending weekly demonstrations has fallen, though tens of thousands have continued to march every Friday through the summer and autumn, saying all members of the old guard should quit power.

Some of Bouteflika’s closest allies and other once-powerful people in the hierarchy have been detained or jailed on corruption charges, but protesters say they want remaining figures associated with the former president to quit too.

It has left the army as the most powerful player in Algerian politics under its chief of staff Lieutenant General Ahmed Gaed Salah, who publicly pushed the interim president to call December’s election.

On Friday, protesters chanted: “Gaed Salah go home!” and “There will be no election this year!”.

They also demanded the removal of interim president Abdelkader Bensalah and Prime Minister Nouredine Bedoui. Some 20 candidates have applied to run in the December election.