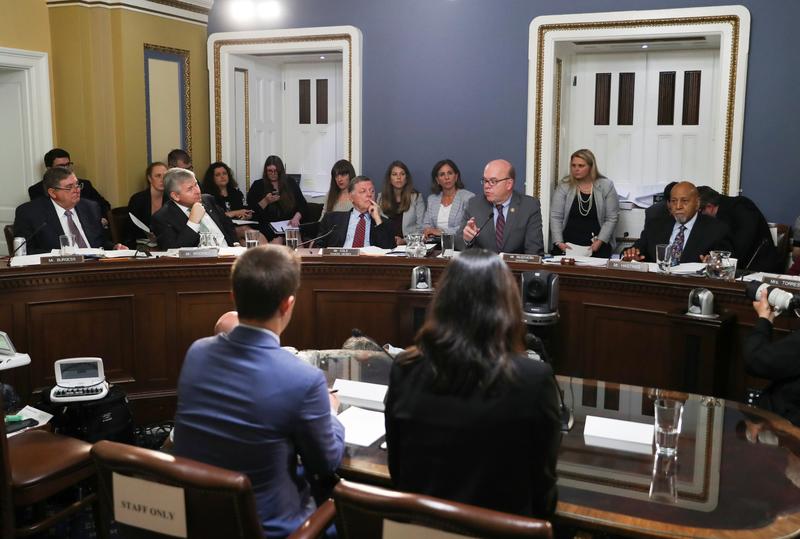 WASHINGTON (Reuters) – Further evidence of private interests seeking the ouster of former U.S. Ambassador to Ukraine Marie Yovanovitch emerged on Wednesday in testimony to a Democratic-led impeachment inquiry into President Donald Trump’s conduct toward that country.

It was unclear why, she said in her opening statement to lawmakers, posted online by the Washington Post.

Trump removed Yovanovitch in May at the urging of his personal lawyer, Rudy Giuliani, who had asked Ukraine to investigate Joe Biden, a leading contender for the Democratic nomination to face Trump in the November 2020 U.S. election. Allies of the president had leveled unsubstantiated charges of disloyalty against Yovanovitch.

Livingston is another well-connected Republican who, along with Giuliani, advocated against Yovanovitch. Others include Trump’s son Donald Trump Jr. and former Republican congressman Pete Sessions.

Democratic Representative Gerald Connolly said he was shocked to hear of Livingston’s role, adding: “We would love to know what possessed him to recommend the firing of an honorable career foreign service ambassador who was doing a good job in protecting U.S. interests and trying to promote democracy in Ukraine.” Another House Democrat, Peter Welch, called Livingston’s actions “disgraceful.”

In the latest move in the fast-moving impeachment inquiry, former White House national security adviser John Bolton has been asked to testify next week, said a source familiar with the matter.

Bolton, a Republican foreign policy hawk who served as Trump’s national security adviser from April 2018 until he was fired by Trump on Sept. 10, has emerged as a key figure in internal White House efforts to stymie efforts to spur a Ukraine investigation into the Bidens.

Tim Morrison, the top Russia specialist on Trump’s National Security Council, is due to testify on Thursday. Morrison resigned from his position on Wednesday, a senior administration official said.

The impeachment inquiry focuses on a July 25 telephone call in which Trump asked Ukrainian President Volodymr Zelenskiy to investigate Biden, a former vice president, and his son Hunter, who had served as a director for Ukrainian energy company Burisma. Trump has denied wrongdoing.

Croft, who testified for roughly five hours on Wednesday, was a member of the National Security Council staff at the White House from July 2017 to July 2018.

She said Livingston characterized Yovanovitch as an ‘Obama holdover’ who was associated with liberal activist George Soros.

Soros is a wealthy financier often assailed by conservatives and known for his support of liberal causes. Barack Obama was Trump’s Democratic predecessor.

“It was not clear to me at the time – or now – at whose direction or at whose expense Mr. Livingston was seeking the removal of Ambassador Yovanovitch,” Croft said.

Giuliani has admitted sending to Secretary of State Mike Pompeo a packet of information in March including a document describing a discredited theory promoted by Trump allies that Yovanovitch was installed in her post in Kiev by Soros and that unless she was removed, Soros “has as much, or more power over Yovanovitch as the president and the Secretary of State.”

As a congressman, Livingston played a prominent role in the Republican-led drive to impeach Democratic President Bill Clinton for lying about his relationship with an intern before quitting in 1998 when it emerged he had engaged in an extramarital affair.

Lobbying disclosure filings with the Justice Department showed Livingston’s firm represented two Ukrainian clients in Washington. They are former Ukrainian Prime Minister Yulia Tymoshenko, who mounted an unsuccessful run for president this year in the election won by Zelenskiy in a landslide in April, and an association of Ukrainian metal producers.

The firm did not immediately respond to a request for comment.

Another Ukraine specialist at the State Department, Christopher Anderson, who also testified on Wednesday, described a conflicted administration on Ukraine policy. Trump’s negative view was often at odds with other State Department and White House officials, who underscored Kiev’s importance to U.S. national security in the face of Russian aggression, their testimony showed.

Yovanovitch testified earlier this month that she did not know Giuliani’s motives for attacking her and that she believed she was ousted based on “unfounded and false claims by people with clearly questionable motives.”

Trump’s nominee to become U.S. ambassador to Russia, John Sullivan, testified in his Senate confirmation hearing on Wednesday that he knew earlier this year about Giuliani’s involvement in the campaign to oust Yovanovitch.

Trump’s July telephone call is at the heart of the congressional inquiry into whether he misused the power of his office for personal political gain and, if so, whether that rises to the level of “high crimes and misdemeanors” that merit impeachment and removal from office under the Constitution.

If the Democratic-led House approves formal charges against Trump, the Republican-controlled Senate would hold a trial on whether to remove him from office.

Trump made his request to Zelenskiy for an investigation into the Bidens after withholding $391 million in security aid approved by Congress to help Ukraine fight Russian-backed separatists in eastern Ukraine. Zelenskiy agreed to Trump’s requests. The aid was later provided.

Separately, the House Rules Committee weighed legislation laying out procedures for the next steps in the impeachment inquiry, with a vote by the full House due on Thursday.

Republicans have accused Democrats of trampling on Trump’s rights and keeping the process too secret.