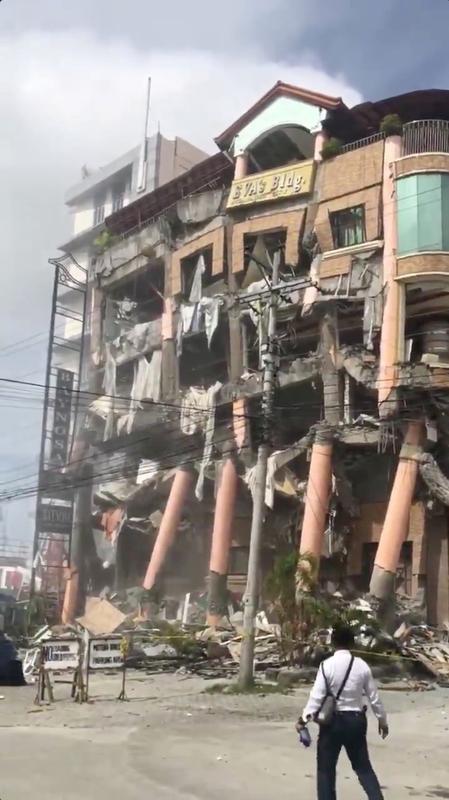 A man looks at a damaged hotel building after an earthquake in Kidapawan City, Cotabato, Philippines, October 31, 2019, in this still image obtained from a social media video. Courtesy of JOHN PAUL RABI GORIT/Social Media via REUTERS.

The integrity of several buildings and homes on Mindanao have already been weakened by a 6.3 earthquake that struck on Oct. 16 and another 6.6 quake on Oct. 29.

A social welfare officer said five people in North Cotabato province died due to the quake, including a village chief when the office wall collapsed on him. This brought the number of killed to 20 in the series of tremors since Oct. 16.

The latest quake occurred 33 km (20 miles) northeast of Tulunan town in Cotabato province, which lies west of Davao City, where President Rodrigo Duterte was when it happened. His spokesman, Salvador Panelo said the Philippine leader is safe.

Police rescued 9 people who were injured after the bottom floor of a mid-rise condominium in Davao collapsed, DZMM radio reported.

In nearby Kidapawan city, a six-storey hotel collapsed, but there was no one inside, Mayor Joseph Evangelista told DZMM radio.

The Philippine Institute of Volcanology and Seismology (Phivolcs) advised the people to remain outside their homes and offices given the possibility of more and stronger aftershocks.

“Buildings could be totally knocked out”, said Erlinton Olavere, a science research specialist at Phivolcs.

Earthquakes are common in the Philippines, which is on the geologically active Pacific Ring of Fire.

Duterte’s office has directed all agencies and local government units to provide the necessary assistance and immediate relief to those affected.