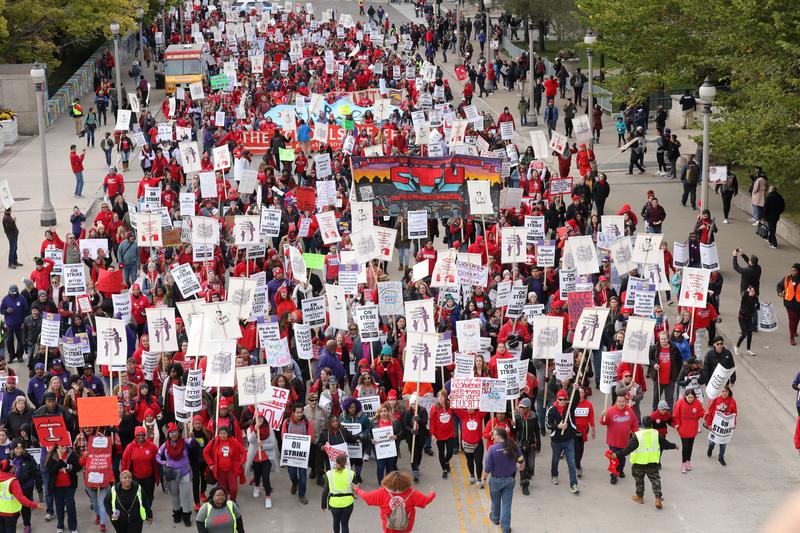 CHICAGO (Reuters) – The head of Chicago’s teachers’ union and Mayor Lori Lightfoot met on Thursday to try to resolve one of the last sticking points in an 11-day strike – whether to make up class days lost by the city’s 300,000 students during the walkout.

FILE PHOTO: Teachers protest during a rally and march on the first day of a teacher strike in Chicago, Illinois, U.S. October 17, 2019. REUTERS/John Gress

The union wants to tack additional days onto the end of the school year, giving its 25,000 members a chance to earn back pay lost during the strike, a demand Lightfoot and the leadership of the third-largest U.S. school district has resisted.

“Our members are tired, frustrated and miss their students … we want to return to the classroom,” Sharkey said in a statement on Thursday. “By not restoring days of instruction to our students lost during the strike, the mayor is making it clear that she is more concerned about politics than the well-being of students.”

Lightfoot, a first-term Democrat, has rejected the demand for makeup days, and accused the union of reneging on a deal reached on Wednesday that she believed would end the second-longest teachers’ strike in recent U.S. history.

Lightfoot asked for a “spirit of compromise” from the CTU during a morning news conference before the meeting with Sharkey.

“They have basically issued a take-it-or-leave-it demand … that’s simply a non-starter,” she said. “If the CTU wants to have a conversation in that spirit of compromise then, of course, I am willing to listen.”

According to the union, the tentative agreement for a five-year contract includes enforceable staffing increases of 209 social workers, amounting to one in each school, a case manager in each school, and 250 additional nurses.

The agreement also has the district spending $35 million to reduce oversized classrooms and prioritize schools that serve the most vulnerable students. African-Americans and Hispanics account for the majority of Chicago’s public school enrollment.

The Chicago walkout follows a wave of teacher strikes across the country over wages and education funding during the past two years, including a week-long work stoppage in Los Angeles in January.

The teachers’ last contract expired July 1, and they walked off the job on Oct. 17.

Any settlement is subject to approval by the Chicago union’s House of Delegates, a body consisting of 825 elected representatives from each of the city’s schools and support staff classifications, before classes can resume.

Digital media teacher Andrew Iverson took matters into his own hands by making and selling $17 Chicago Teachers Union T-shirts at rallies and marches to make ends meet for himself and his two young kids.

“I live comfortably but, at the same time, I live pay check to pay check,” said Iverson. “That is why I am doing this. I had to adapt and make the best of it.”

Teacher Michele Suffredin, 51, planned for the financial pinch the strike would cause by arranging to delay payments on her student loans and credit cards.

“I am more concerned about the disinvestment in education. This is a short-term pain for us and, at some point, we will go back,” she said during a recent rally.

Teachers said they are also facing the prospect of losing their health insurance, which is due to expire on Friday if they are not back in school.

Some teachers said they have saved money over the last few months with the prospect of a strike looming.

“We made sure we had plenty of money put away,” said elementary school teacher Lauren Venuti, 32, as she stood on the picket line. “But the holidays are coming up and I didn’t want that to be affected.”

Venuti has picked up extra shifts during the strike at the restaurant where she has worked part-time for three years.

“We need to eat,” said Venuti, who lives with her husband and several pets.