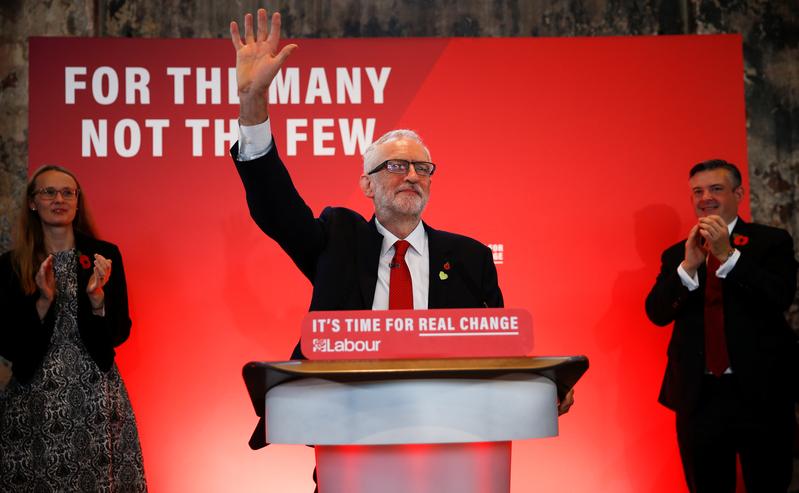 LONDON (Reuters) – On the day Britain was supposed to have left the European Union, voters instead faced the start of an election campaign, with opposition Labour leader Jeremy Corbyn pledging to overthrow a “rigged system” he said was run by billionaires and tax-dodgers.

After failing to deliver Brexit by the Oct. 31 deadline, Prime Minister Boris Johnson called the Dec. 12 election to break what he cast as a political paralysis that had thwarted Britain’s departure and undermined confidence in the economy.

Opinion polls suggest the election is Johnson’s to lose. His Conservative Party is leading Labour by 15 to 17 percentage points, according to IpsosMORI and YouGov. Yet the overshadowing issue of Brexit, which has divided both major parties and their voters, could confound conventional calculations.

While Brexit frames the election, with Labour pledging to hold a second referendum on it, it is being fought by two of the most unconventional British politicians of recent years who offer starkly different visions for the world’s fifth-largest economy.

In his first major speech of the campaign, Corbyn said the election was a once-in-a-generation chance to overthrow what he cast as a corrupt elite which profited by exploiting workers, lying to the public and polluting the environment.

“Together, we can pull down a corrupt system and build a fairer country that cares for all,” Corbyn, a 70-year-old veteran socialist campaigner, said at a speech in London.

“Even if the rivers freeze over, we’re going out to bring about real change for the many, not the few,” Corbyn said.

He proposed nationalisation of rail, mail and water services and higher taxes on the bankers who have made London the pre-eminent international financial capital.

The first December election in Britain since 1923 will be one of the hardest to call in years. Brexit has variously fatigued, enthused and enraged swathes of voters while eroding loyalties to the two major parties.

IpsosMORI said the Conservatives were on 41% with Labour on 24%. But that still leaves a third of the electorate up for grabs – and voter poaching could decide the final result.

A five-year flurry of two historic referendums – on Scottish independence in 2014 and Brexit in 2016 – and two national elections in 2015 and 2017 have delivered often unexpected results that ushered in political crises.

Johnson will be aware that the Conservatives under his predecessor, Theresa May, were polling at about 50%, double that of Labour, ahead of the last election in 2017 but then went on to lost their majority in parliament, eventually winning under 2% more of the vote share than Labour.

Johnson, who has failed to deliver on his “do or die” promise that Britain would leave the EU on Oct. 31, is pitching the election as a chance to get Brexit done, and he will accuse Corbyn of threatening the United Kingdom’s future.

“Today should have been the day that Brexit was delivered and we finally left the EU,” Johnson said in pre-prepared remarks provided by his office.

Corbyn repeated his claim that Johnson intended to sell off Britain’s National Health Service (NHS) to American companies as part of a post-Brexit trade deal with U.S. President Donald Trump.

Johnson has denied any such intention. His party was on Thursday campaigning under the slogan: “Back Boris for more NHS funding.”

The prime minister, who was hailed by the U.S. president as Britain’s Trump, will visit a school, hospital and police unit to argue that Britain needs to deliver Brexit so it can move on and focus on investing in public services.