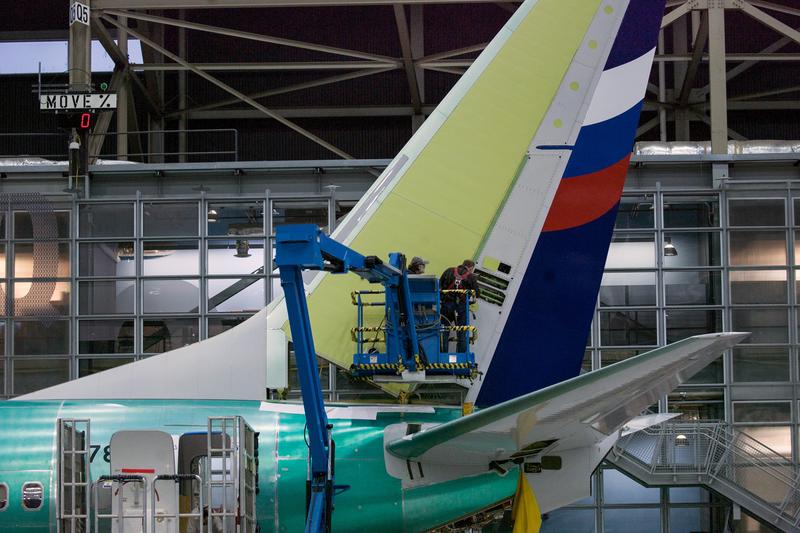 FILE PHOTO: Boeing employees work on the tail of a Boeing 737 NG at the Boeing plant in Renton, Washington December 7, 2015. REUTERS/Matt Mills McKnight

The cracks are on what is known as the “pickle fork” – a part that attaches the plane’s fuselage, or body, to the wing structure.

Repairing the cracks requires grounding the airplane, with remedial work costing an estimated $275,000 per aircraft, according to aviation consultancy IBA.

Boeing on Oct. 11 said 38 planes worldwide had been grounded after urgent checks but has not provided a further update. The issue surfaced while the newer 737 MAX model is grounded globally following two deadly crashes.

The U.S. Federal Aviation Administration (FAA) on Oct. 2 mandated checks of 737 NGs with more than 30,000 take-off and landing cycles within seven days.

Qantas discovered cracks in a plane with about 26,700 cycles that was undergoing heavy maintenance, while Southwest found cracks in one with about 28,500 cycles, sources with knowledge of the matter told Reuters on condition of anonymity.

A Qantas spokesman said the airline had found cracking in one jet with just under 27,000 cycles that had been removed from service for repair.

He said that no Qantas jets had yet reached 30,000 cycles, but that the airline would inspect 33 planes with more than 22,600 cycles by the end of this week.

A Southwest spokesman said he could not confirm the number of cycles of the three jets the airline has pulled from service for pickle fork repairs. He said the company has complied with the FAA directive on inspections but was expanding checks to its entire 737 NG fleet.

In a filing with the Securities and Exchange Commission last week, Boeing said all 737 NGs with more than 30,000 flight cycles and about one-third of planes with over 22,600 flight cycles had been inspected for pickle fork cracks.

The manufacturer said additional assessments were underway to determine the cause and potential implications for planes with fewer than 22,600 cycles.

“Depending on the results of these assessments, additional inspections or repairs may be required,” Boeing said.

It said that so far the repair costs were not big enough to affect its bottom line. But the company added that it could not estimate potential future financial impacts because since the inspections were ongoing.

A Boeing spokesman on Wednesday said he could not provide a further update.

American Airlines and United Airlines, whose 737 NG fleets have less than 30,000 cycles, are also inspecting their entire fleets but have not found any pickle fork issues so far, representatives for both airlines said.

Virgin Australia said it had already inspected all 19 of its 737 NGs with more than 22,600 cycles and did not find any cracks.

South Korea’s transport ministry said all nine 737 NGs grounded in the country with cracks had more than 30,000 cycles.

Reporting by Jamie Freed in Sydney and Tracy Rucinski in Chicago; additional reporting by Eric M. Johnson in Seattle and Heekyong Yang in Seoul. Editing by Gerry Doyle