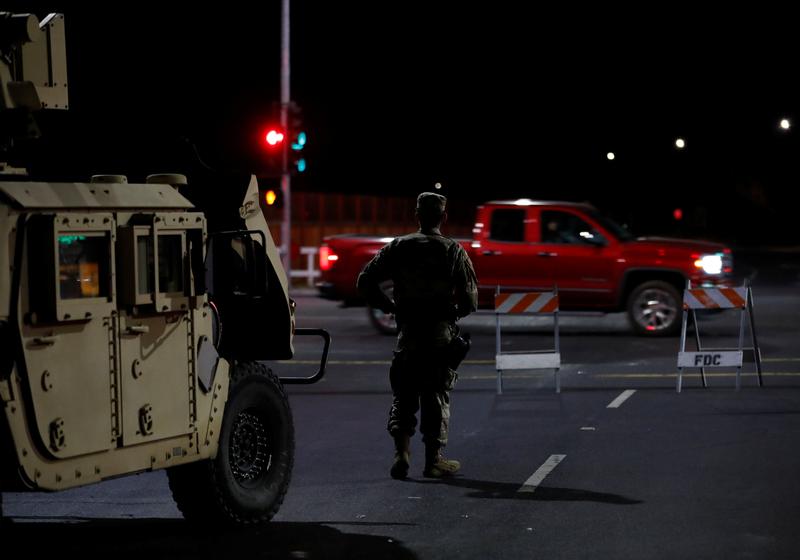 LOS ANGELES (Reuters) – A fresh wildfire ignited near the Ronald Reagan Presidential Library outside Los Angeles on Wednesday as extraordinarily dry, prolonged Santa Ana winds whipped through the region, forcing meteorologists to grasp for new language to warn of the danger.

The fire broke out in Ventura County’s Simi Valley, just a few miles away from a 600-acre (240-hectare) blaze that has been consuming the shrub-covered hills near the Getty Center museum in Los Angeles for two days, displacing thousands of residents from some of the area’s priciest neighborhoods.

For firefighters, the weather forecast could not be worse: The National Weather Service issued an unprecedented “extreme red flag” warning for wildfires in Los Angeles and Ventura counties ahead of two days of intense dry wind gusts.

“I don’t know if I’ve ever seen us use this warning,” said forecaster Marc Chenard. “It’s pretty bad.”

The Easy Fire in Simi Valley quickly grew to 200 acres (81 hectares). A long wall of orange flames and thick, gray smoke could be seen just down the slope from the hilltop Reagan Library, which houses many of the former president’s records and the plane he used for official travel. At least two helicopters operated by county fire officials dropped water on the flames.

Fire officials ordered residents to evacuate the area around the library, which includes a number of sprawling ranch properties.

A few employees remained at the library, which has a fire protection system that included fire doors and sprinklers, spokeswoman Melissa Giller told ABC7 News. The library has trucked in goats in years past to eat away flammable scrub around the building’s perimeter.

The Santa Ana winds are a regional weather phenomenon that sends gusts westward off the desert out to the Southern California coast. They are forecast to reach sustained speeds of 50 to 70 miles per hour (80 to 110 km per hour) on Wednesday and Thursday, raising the risk of sparks and embers being whipped into fresh wildfires in unburned areas.

City arson investigators say the Getty fire was likely caused by a broken tree branch being blown into power lines during high winds on Monday morning.

Electricity remained cut off to roughly half a million homes and businesses in Northern and Central California on Tuesday as a precaution by the state’s largest utility.

An army of some 1,100 firefighters battled the Getty fire Tuesday in a narrow window of slower winds. By early Wednesday, crews had managed to contain about 15 percent of the blaze.

In Northern California, where firefighters struggled for a sixth day against a 76,000-acre (30,760-hectate) blaze in Sonoma County’s winemaking region, high-wind forecasts prompted Pacific Gas and Electric Co (PCG.N) to impose a new round of blackouts for nearly 600,000 homes and business.

That included about 400,000 customers blacked out in a power shutoff that PG&E instituted days earlier, the company said.

Early Wednesday, PG&E announced that it had restored about 73 percent of the 970,000 or so customers affected in earlier shutoffs.

PG&E has been implicated in the Sonoma County blaze, dubbed the Kincade fire. The utility acknowledged last week that the Kincade fire broke out near a damaged PG&E transmission tower at about the time a live high-voltage line carried by that tower malfunctioned.

California National Guard Spc. Theodoro Vicencio maintains a checkpoint at a road closure along the south side of the Kinkade Fire in Santa Rosa, California, U.S., October 29, 2019. REUTERS/Fred Greaves

The company filed for bankruptcy in January, citing $30 billion in potential liability from a series of deadly fires sparked by its equipment in 2017 and 2018.

Citing progress made against the Kincade fire, Newsom said the number of evacuees in Northern California had diminished from 190,000 at the peak of that blaze to 130,000 on Tuesday.

Property losses from the Kincade, listed at 15% contained, were put at 189 homes and other structures, double Monday’s tally.