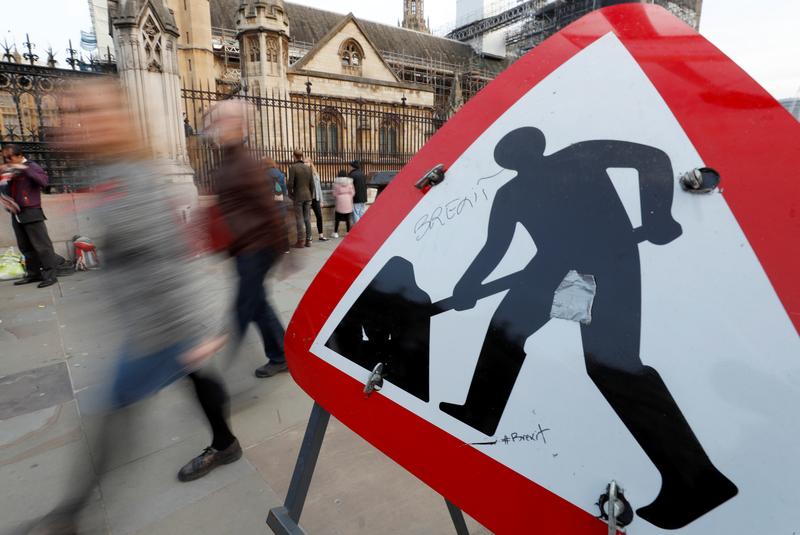 LONDON (Reuters) – British Prime Minister Boris Johnson will on Tuesday make a new attempt to get lawmakers to approve an early national election to try to break the deadlock over Brexit.

Anti-Brexit sign is seen as protesters demonstrate outside the Houses of Parliament in London, Britain, October 28, 2019. REUTERS/Yara Nardi/File Photo

On Monday he failed in his third attempt to win backing for an early election via a route which required the support of two-thirds of lawmakers in Britain’s 650-seat parliament.

He will now try via legislation, which only needs the backing of a simple majority.

What will parliament debate?

The government has not yet published the legislation but Johnson said on Monday it would be “a short Bill for an election on 12 December”.

Opposition parties favour holding any election a few days earlier, on Dec. 9, in part due to concern about university students missing out on voting if they have gone home for their Christmas holidays. They are likely to try and change the date of the election proposed in the legislation.

The Liberal Democrats and Scottish National Party have indicated they would, for now, drop their desire to lower the voting age to 16 in order to get the legislation through.

What will happen in parliament?

If there are no urgent questions or government statements, lawmakers will begin debate on the election in the early afternoon. The debate will start with a ‘business of the house motion’ setting out the timetable for consideration of the bill. If this is approved, parliament will move on to the bill itself.

Will opposition parties support it?

Jeremy Corbyn, leader of the main opposition Labour Party, said on Monday he would “consider carefully” legislation which locked in an election date.

“When no deal (Brexit) is off the table, when the date for an election can be fixed in law, and when we can ensure that students are not being disfranchised, we will back an election so that this country can get the government it needs,” he said on Monday.

The Liberal Democrats and SNP have previously made their support conditional on three things:

1. No-deal Brexit is ruled out.

2. The government agrees not to pursue ratification of its EU divorce deal before an election.

3. The date of the election must be stipulated in the bill.

These conditions appear to have been met – the government on Monday confirmed it would not seek to ratify its Brexit deal before any election, the EU agreed a Brexit delay to Jan. 31 next year, and Johnson said the law would include a Dec. 12 election date. This was not the opposition party’s preferred date however, so they could oppose it on those grounds.