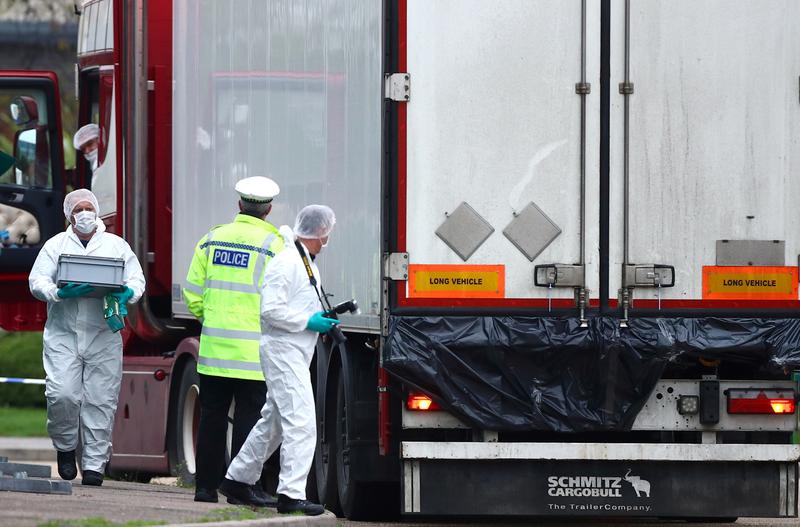 VINH, Vietnam (Reuters) – Vietnam is trying to speed up the identification of its citizens who are suspected to have been among the people found dead in the back of a truck near London last week, Deputy Foreign Minister Nguyen Quoc Cuong told Reuters on Tuesday.

FILE PHOTO: Police are seen at the scene where bodies were discovered in a lorry container, in Grays, Essex, Britain October 23, 2019. REUTERS/Hannah McKay

A UK court heard on Monday that a global ring had been involved in smuggling the group. The truck’s driver is facing charges of manslaughter and people trafficking.

“The nationality of the victims hasn’t been officially confirmed yet,” Cuong said on the sidelines of a conference in the northern-central town of Vinh.

Vietnam and Britain “are trying to speed up identification of the bodies, but no deadline has been set,” he said.

On Monday, Vietnam’s government said British police had sent documents regarding four of the victims to Hanoi for further verification.

The discovery of the bodies last week on an industrial estate near London has shone a spotlight on the illicit trade that sends the poor of Asia, Africa and the Middle East on perilous journeys to the West

In Vietnam, poor job prospects, encouragement by authorities, smuggling gangs, environmental disasters and government pressure on Catholics are all local factors behind the wave of migrants.

The desire to go overseas has created a thriving underground market in the Southeast Asian country for people smugglers, many of whom promise safe and even “VIP” packages for secret travel to Europe, anti-trafficking experts, migrants and their family members have told Reuters.

News of the tragedy has plunged the rural provinces of Nghe An and Ha Tinh in northern-central Vietnam into despair, with many families fearing loved ones may be among the dead.

Authorities in Nghe An have launched an appeal for concerned family members to submit copies of photos and identification of the missing to their local People’s Committee for verification, according to a copy of the appeal seen by Reuters.

Communist-ruled Vietnam is extremely sensitive to events which could lead to social unrest or public gatherings.

A candlelit ceremony outside a Catholic cathedral in Hanoi in memory of the 39 victims was broken up by police on Sunday, organizers said.

The propaganda department of Vietnam’s ruling Communist Party has instructed local media chiefs not to report or speculate on the nationality or identity of the victims without confirmation from Hanoi’s foreign ministry, according to a copy of the instruction seen by Reuters.

“Please be considerate and cautious,” the instruction said.