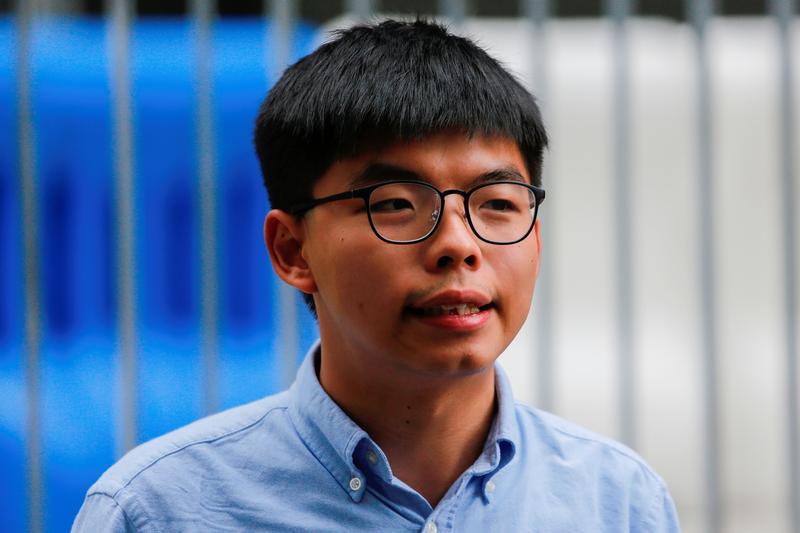 Wong, who was 17 when he became the face of the 2014 student-led Umbrella Movement, has not been a prominent figure in the current anti-government protests, which are largely leaderless, in the Chinese-ruled city.

However, the bespectacled Wong, now 23, holds a high profile internationally and described his disqualification – on the grounds that advocacy of Hong Kong’s self-determination violates electoral laws – as political censorship.

“The decision to ban me from running for office is clearly politically driven,” Wong said on Tuesday.

“The so-called reasons are judging subjectively on my intention to uphold basic law but everyone would know that the true reason is my identity, Joshua Wong.”

This year’s protests, which started over a now-withdrawn extradition bill, have evolved into calls for greater democracy. They have plunged the city into its biggest crisis in decades, taken a heavy toll on the economy and show little sign of letting up.

They have also posed the biggest populist challenge to Chinese President Xi Jinping since he came to power in 2012.

Wong said he was the only person disqualified out of more than 1,100 candidates in district council elections set for November.

Such votes have previously attracted little fanfare and been dominated by pro-Beijing candidates. But a summer of unrest has infused a new significance in the poll and prompted a record number of candidates and voters to register.

“It is questionable whether Mr Wong accepts the People’s Republic of China’s sovereignty over (Hong Kong) and whether he is of the view that independence and referendum would be options for Hong Kong,” the returning officer for Wong’s district, Laura Aron, said on the decision to exclude him in a statement seen by Reuters.

Hong Kong’s government said in a statement one candidate was deemed invalid for contravening electoral laws that bar “advocating or promoting ‘self-determination’”. It did not identify Wong by name.

Wong has said he supported the idea of a non-binding referendum for people to have a say over Hong Kong’s future but that he is against independence, according to a post on his Facebook page on Saturday.

Wong’s disqualification followed another weekend of protests that descended into chaotic clashes with police.

Black-clad and masked demonstrators set fire to shops and hurled petrol bombs, while residents in the working-class district of Mongkok poured on to the streets to hurl abuse at police officers sent to subdue the protesters.

Embattled Hong Kong leader Carrie Lam said on Tuesday she expected the Asian financial hub to record negative economic growth this year, in part as a result of the unrest.

“Our current assessment is that the full year of 2019 will likely show negative growth, which means we won’t be able to achieve the already revised down positive growth of 0-1%,” Lam said. “The situation is very grim”.

A preliminary estimate for third-quarter GDP on Thursday was expected to show two successive quarters of contraction – the technical definition of a recession.

Beijing-backed Lam said the government would unveil new measures to boost the economy once the unrest died down, without giving any details.

With visitors deterred by months of violence, many small firms across the city have already closed or are struggling to turn a profit.

Protesters are angry about what they view as increasing interference by Beijing in Hong Kong, which returned to Chinese rule in 1997 under a “one country, two systems” formula intended to guarantee freedoms not seen on the mainland.

China denies meddling and has accused foreign governments, including the United States and Britain, of stirring up trouble.