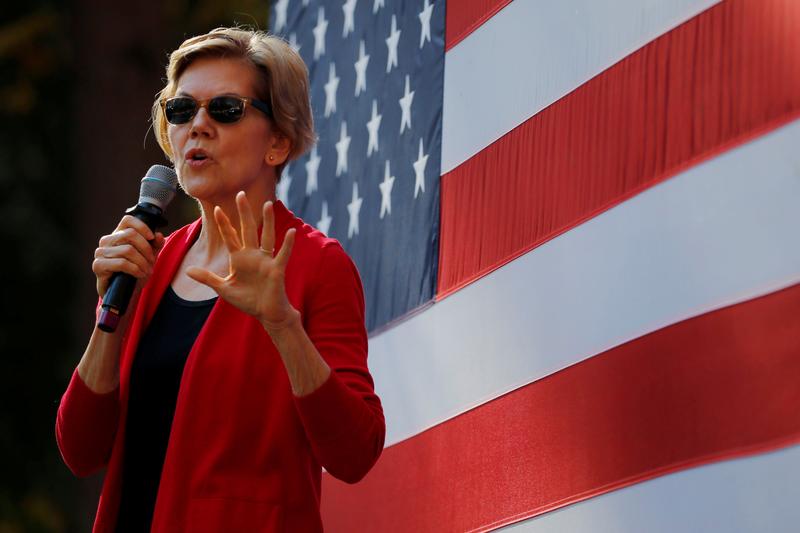 Warren, a U.S. senator from Massachusetts, has risen to the upper echelon of the 18-candidate Democratic field, where she is jockeying with former Vice President Joe Biden for front-runner status, according to opinion polls. The Democratic nominee will likely face Republican President Donald Trump in the November 2020 election.

Warren’s campaign has been animated by a series of plans intended to end the influence of big money in Washington, including several measures designed to end the so-called revolving door between lobbyists and government.

She previously said she would prevent large companies from hiring senior government officials for four years after they leave office. On Tuesday, she expounded on that idea, saying she would apply the ban to any company that is worth more than $150 billion or exercises significant control over its industry’s market.

Any company found to violate the restriction would be hit with a fine equal to 1% of its net profit, with subsequent violations resulting in even higher fees – penalties that would reach hundreds of millions of dollars for the largest corporations.

She also said she would extend the ban to any government contractor with more than $5 million in annual federal contracts, citing a report from the nonpartisan watchdog Project on Government Oversight that found the largest defense contractors hired more than 380 former defense officials and military officers within two years of leaving government.

“Giant corporations should compete on a level playing field – and they shouldn’t be able to rig the system by scooping up every available former government official in an effort to get federal regulators off their backs,” she wrote.

Warren has previously criticized as anti-competitive the largest tech companies, such as Facebook, Amazon.com Inc and Alphabet Inc’s Google, and has said she would seek to break them up by enforcing antitrust regulations more strictly.