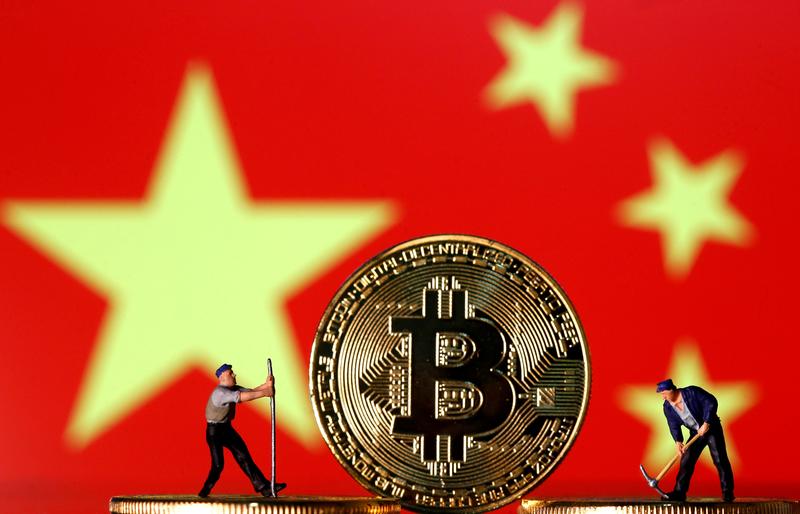 FILE PHOTO: Small toy figurines are seen on representations of the Bitcoin virtual currency displayed in front of an image of China’s flag in this illustration picture, April 9, 2019. REUTERS/Dado Ruvic/Illustration

SHANGHAI (Reuters) – Chinese state media urged investors to remain rational and not equate Beijing’s support for blockchain as a boost for virtual currencies, after comments by Chinese President Xi Jinping drove up shares in blockchain-related firms and the price of bitcoin.

Xi said last week that China should accelerate the development of blockchain technology, a digital ledger that forms the backbone of many cryptocurrencies such as bitcoin. His remarks sparked a rush into the shares of firms engaged in, or believed to be engaged in blockchain or digital currency-related businesses.

“Blockchain’s future is here but we must remain rational,” the People’s Daily newspaper, which is published by China’s ruling Communist Party, said in a commentary late on Monday.

The government cracked down on the country’s cryptocurrency industry in 2017 with regulators banning the practice of creating and selling virtual currencies or tokens and shutting local cryptocurrency trading exchanges, saying that they were facilitating illegal fundraising and pyramid schemes.

Chinese officials, however, said at the time that the research into blockchain technology was still encouraged although Xi’s comments were the first time Beijing had publicly thrown such vocal support behind the sector.

Beijing is also creating its own central bank-issued digital currency to cut the costs of circulating traditional paper money and boost policymakers’ control of money supply.

Reporting by Brenda Goh in Shanghai; Editing by Jacqueline Wong