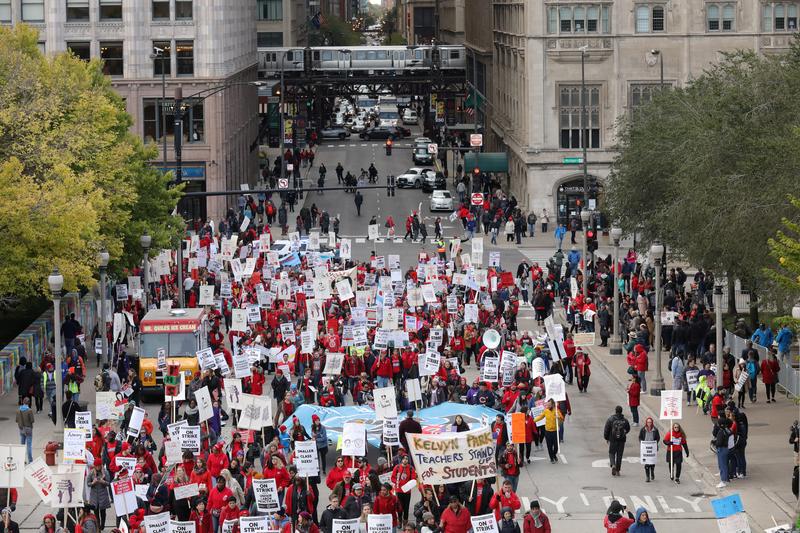 CHICAGO (Reuters) – The Chicago Teachers Union and education officials broke off talks early on Tuesday with no deal in sight to end a teachers’ strike after meeting behind closed doors overnight.

FILE PHOTO: Teachers protest during a rally and march on the first day of a teacher strike in Chicago, Illinois, U.S., October 17, 2019. REUTERS/John Gress

Students in the third-largest U.S. school district were expected to miss a ninth day of classes on Tuesday as negotiators grapple over class sizes, support staff levels and pay.

“They’re done for the night. No deal,” a union spokeswoman wrote in an email to Reuters shortly before 3 a.m.

Both the union and Chicago Public Schools officials had announced before midnight that they planned to stay at the table until a tentative agreement was hammered out, but talks are expected to resume at 10 a.m. on Tuesday.

The strike is the latest in a recent wave of work stoppages across the United States by educators who have called for more school resources and emphasized the need to help underfunded schools, framing their demands as a call for social justice.

The strike in Chicago is the second longest in recent memory. A teachers strike in Union City, California, in June lasted three weeks.

Chicago Public Schools Chief Executive Janice Jackson said in a video posted on Twitter on Monday that the district’s proposal addressed overcrowding and understaffing that have “gone unaddressed for years, even generations”.

Chicago Mayor Lori Lightfoot said in the same video: “CTU told us, told their membership and told the entire public that they wanted this contract to transform public education in Chicago. That is exactly what our offer does.”

The union, which has been without a contract since July 1, voted this month to go on strike if a deal was not reached.

Teachers have picketed in front of many of the district’s 500 schools and have held several rallies on Chicago’s downtown area since the strike started on Oct. 17. The district has more than 300,000 students.

“I think she’s digging in for a long strike. If what she is doing is trying to test our resolve, that’s a mistake,” CTU president Jesse Sharkey said on Monday, referring to Lightfoot.

The strike is the first major test for Lightfoot, a political newcomer elected in April. She has said the district could not afford the union’s full demands, estimating they would cost an extra $2.4 billion each year for an increase of more than 30% in the current $7.7 billion school budget.

Reporting by Brendan O’Brien in Chicago; Additional reporting by Rich McKay in Atlanta; Editing by Paul Tait and Alison Williams