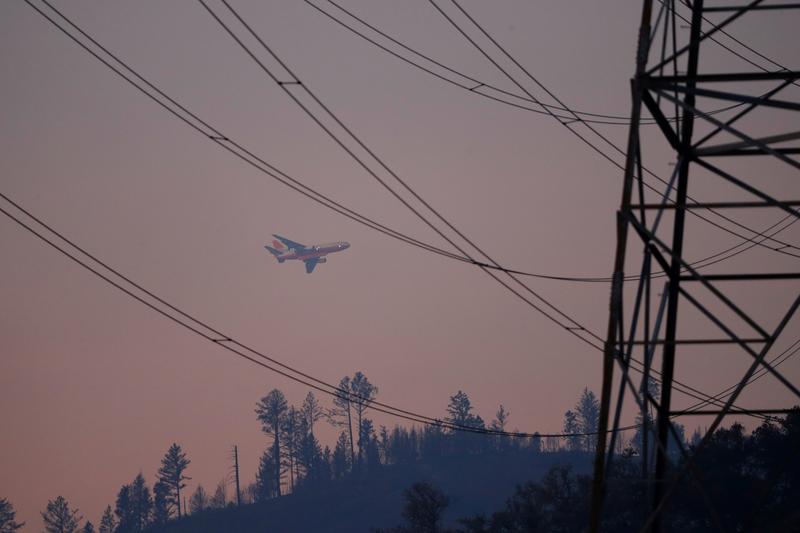 LOS ANGELES (Reuters) – A wildfire raged through some of Los Angeles’ upscale neighborhoods on Tuesday, prompting city officials to chide wealthy evacuees to remember to tell their housekeepers and gardeners not to enter the danger zone.

Firefighters were battling to try to save thousands of imperiled homes as thousands of residents fled the area.

Los Angeles officials reminded wealthy evacuees to alert their service employees of the danger in light of news reports that several turned up for work at some of the 10,000 homes and businesses under smoky skies in the mandatory evacuation zone.

“I want to encourage people to be reaching out to anybody who may be showing up at their home and urge them to stay away,” Councilmember Mike Bonin told a news conference on Tuesday morning.

The brush fire that broke out early on Monday near the Getty Center art museum on the city’s West Side grew about 40 acres (16 hectares) overnight to 658 acres (266 hectares), Mayor Eric Garcetti told a news conference.

“That’s a good sign, actually, that it didn’t grow by more,” he said. Eight homes have been destroyed so far.

Across the state, hundreds of thousands of people were left in the dark as power companies cut off electricity to try to prevent more fires from being sparked by snapped cabling in the brushland.

Los Angeles Lakers basketball great LeBron James, “Terminator” actor and former California Governor Arnold Schwarzenegger, as well other celebrities, said on Twitter they had been forced to evacuate their homes.

Weather forecasters say there could be worse to come, with the National Weather Service (NWS) predicting gusting winds in the mountains around Los Angeles, where planes have been dousing the fire from the air.

The Santa Ana winds in the south could hit their worst levels of the season and last into late Thursday, according to Marc Chenard of the NWS Weather Prediction Center.

Until at least Wednesday, in the bone-dry wine country about 70 miles (113 km) north of San Francisco, winds will hit up to 65 mph (101 kph) in the mountain areas and 35 mph (56 kph) in the valleys and coast around where the Kincade Fire, the state’s biggest, is burning, he said.

Pacific Gas and Electric Company (PCG.N) said early on Tuesday that almost 600,000 more electric customers would have their power shut off, starting early in the day, as a fire prevention measure ahead of the wind storms.

This is on top of the 970,000 PG&E customers already shut off, although about half of those were restored by Monday night, the company announced.

After four days of sharp declines, PG&E shares rebounded, up 17% at $4.49 on the New York Stock Exchange on Monday.

As of early Tuesday, the Kincade fire had scorched more than 75,000 acres (30,351 hectares), destroyed 123 homes and other structures and was 15 percent contained as it burned across parts of Sonoma County’s wine country, state fire officials said.

California Governor Gavin Newsom said he was confident that firefighters had secured enough perimeters around the Kincade fire that it no longer posed an imminent threat to two communities north of Santa Rosa, although he conceded the fight was not over.

The cause of the Kincade fire in Sonoma County, where 190,000 people were ordered to evacuate, remains under investigation.