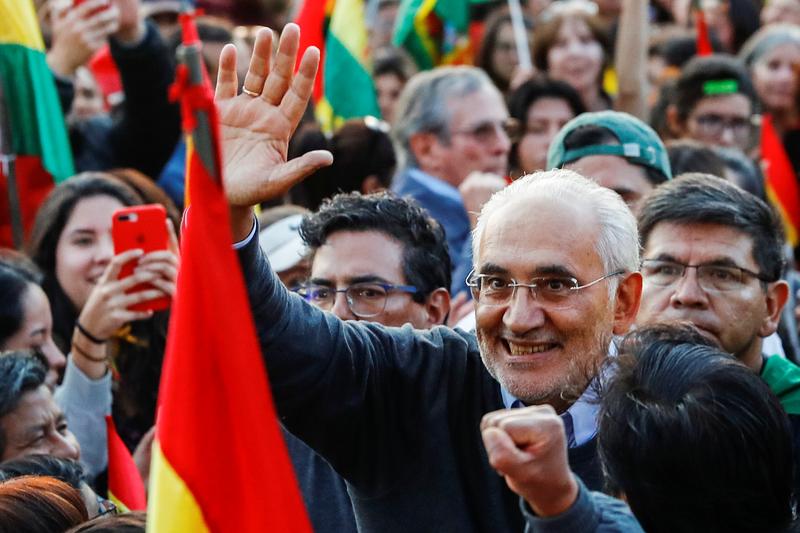 Bolivia has been convulsed by protests for more than a week after its electoral tribunal abruptly suspended publication of presidential election results, later announcing Morales had pulled off a razor-thin victory allowing him a fourth term.

The results, which meant Morales narrowly avoided a run-off with Mesa, sparked accusations of fraud from the opposition leader and his supporters.

Morales, Latin America’s longest-serving leader, has denied the allegations but agreed to an audit and said he will go to a second round of voting if irregularities are found.

No date has been set as yet for the audit by the Organization of American States (OAS) but Bolivians have taken to the streets. Residents of capital La Paz on Monday took part in a general strike called by the opposition.

“I have always had the spirit of dialogue and a democratic and peaceful spirit, but my personal will is, at this time, conditioned by the popular protests,” said 66-year-old Mesa, who was previously president from 2003 to 2005.

“The popular protests are today demanding the government take a step back and admit fraud has been committed,” Mesa told Reuters at his office.

Bolivians “would not accept a negotiation where the fundamental principles that are being defended today on the streets could be ceded,” Mesa said.

The election audit should be carried out with speed and precision, he said, adding he backs calls for a second round from the OAS and the European Union.

Mesa demurred when asked how he can square desire for a run-off with distrust of the electoral tribunal, given some opposition members have called for the vote to be annulled.

“I am absolutely convinced that once it is unequivocally established that there was fraud, there is an open space,” said Mesa, declining to elaborate.

He said the crisis was due entirely to Morales’ desire to stay in power for his lifetime.

“I have no doubt that his intention is to stay in government indefinitely, illegitimately,” Mesa said. “This is a political process that is debasing, deteriorating and corrupting – that is expressed by the desire for power for power’s sake.”

Morales has regularly said his continued candidacies are a response to the will of Bolivians and a patriotic sacrifice on his part.