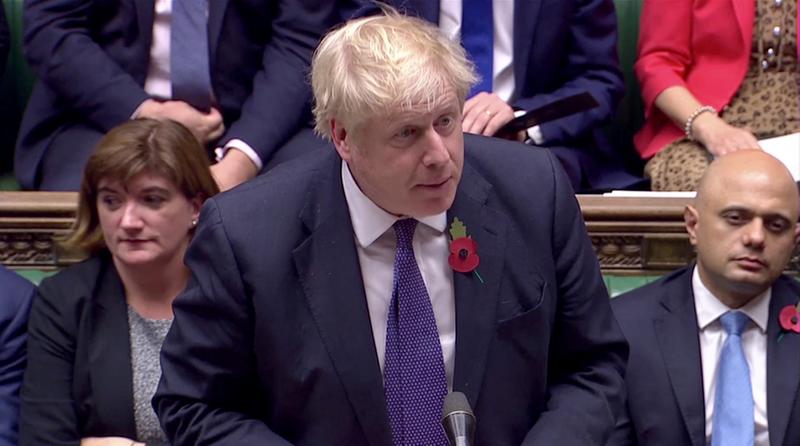 LONDON (Reuters) – The European Union agreed to a Brexit delay of up to three months on Monday, as Prime Minister Boris Johnson said he would push on with his bid to end Britain’s political paralysis with an election on Dec. 12.

With the United Kingdom’s scheduled Oct. 31 departure from the EU now virtually certain to be postponed, Brexit hangs in the balance, with British politicians still arguing over how, when or even whether the divorce should take place at all.

Johnson, who had loudly promised to deliver Brexit on Oct. 31, “do or die”, has repeatedly demanded an election to end what he casts as a nightmare political deadlock that is sapping public trust by preventing any Brexit outcome at all.

Hours after the 27 countries remaining in the EU backed his reluctant request for a delay, Johnson attempted to force a snap election on Dec. 12 in the hope of finally winning a majority to pass the divorce deal he has negotiated with Brussels.

But his third attempt to call such an election gathered only 299 votes in parliament, short of the 424 – or two-thirds of the house – that he needed.

After the vote, Johnson said he would try again, by a legislative route that would only require a simple majority.

“We will not allow this paralysis to continue and, one way or another, we must proceed straight to an election,” Johnson told parliament. “This House cannot any longer keep this country hostage.”

To follow this route, Johnson will need the support of opposition parties such as the Scottish National Party (SNP) and the Liberal Democrats.

These have been pushing for a Dec. 9 election, aiming to ensure that Johnson cannot try again to rush his divorce deal through.

The BBC’s political editor said Johnson’s office had confirmed that the government would not bring the deal back to parliament – potentially opening the way for the SNP and LibDems to back a snap poll on Johnson’s preferred date of Dec. 12.

After almost four years of tortuous discussion, the United Kingdom remains divided over a divorce that removes what was once considered to be one of the West’s most stable democracies from the European project.

Britain’s Prime Minister Boris Johnson speaks at the House of Commons in London, Britain, October 28, 2019, in this screen grab taken from video. Parliament TV via REUTERS

While almost all British politicians agree that an election is needed, they want to inflict maximum political damage on Johnson – who leads in opinion polls – by preventing his last-minute deal from being ratified before the poll.

Johnson, in turn, is trying to shift the blame for failing to deliver Brexit by Oct. 31 onto parliament.

“We have a great new deal, and it’s time for the voters to have a chance to pronounce on that deal, and to replace this dysfunctional parliament with a new parliament that can get Brexit done so the country can move on,” Johnson said.

In a letter to European Council President Donald Tusk, Johnson reluctantly accepted the delay agreed in Brussels, saying he had no choice under British law.

“This unwanted prolongation of the UK’s membership of the EU is damaging to our democracy,” he said.

“I would also urge EU member states to make clear that a further extension after 31st January is not possible. This is plenty of time to ratify our deal.”

If no EU country objects within 24 hours – by Tuesday afternoon – the delay will have been formally adopted.

The EU, forged from the ruins of World War Two as a way to prevent another ruinous conflict in Europe, is fatigued by Britain’s protracted crisis but keen not to be held responsible for an economically tumultuous “no-deal” rupture.