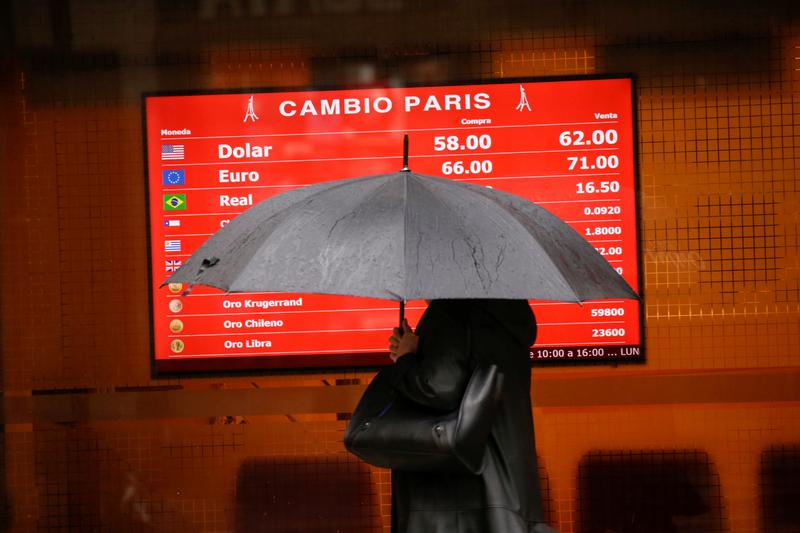 BUENOS AIRES (Reuters) – Argentina’s peso closed stronger on Monday and its black market counterpart reversed course after hitting a record low in a day of tempered market reaction on the heels of victory by Peronist presidential candidate Alberto Fernandez in Sunday’s election.

Argentine Treasury Minister Hernan Lacunza said the center-left Fernandez and incumbent Mauricio Macri had a “good dialogue” on Monday in a meeting at Casa Rosada initiated by Macri to discuss the new government’s transition to power, a move that may have helped calm investors’ nerves.

Lacunza also said in the afternoon press conference that October inflation would be lower than the 5.9% of September.

Argentina’s markets are in the spotlight after the Sunday vote, which handed an outright victory to the country’s Peronist opposition, who now face the daunting task of righting the country’s economy and stabilizing markets.

The peso ARS=RASL closed 0.65% stronger at 59.60 per U.S. dollar after center-left Fernandez clenched victory over Macri in the presidential election and the central bank clamped down on dollar purchases.

Argentina’s black market peso split away, weakening 1.95% to 77 per U.S. dollar, a record low before recovering to 73 per greenback.

Country risk, though, was on the rise all day, hitting 2,268 in the afternoon, reflected in a drop in over-the-counter bonds, which were down by an average of 1.6%.

Argentine officials tried to get in front of post-election market jitters on Monday by assuring Argentines that Macri’s government would be working with Fernandez on a smooth transition.

Hours after the election, the central bank announced it would tighten a restriction on dollar purchasing to $200 per month for individuals, down from $10,000 a month, until December, when the new government will be in place.

Before local markets opened, central bank president Guido Sandleris acknowledged that the bank’s new stricter dollar-purchasing limits would affect many people but vowed to do all possible to protect the bank’s dwindling foreign reserves.

Markets will be closely watching for signals of Fernandez’s approach to the country’s relationship with the International Monetary Fund, which extended a $57 billion line of credit to Argentina in 2018 but has been holding off on disbursing the latest tranche of funds.

Fernandez had around 48% of the vote to Macri’s 40% – a wide enough margin to win outright but a far better result for conservative leader Macri than a landslide defeat in an August primary that sparked a market collapse.

The bank has spent about $22 billion in its reserves to defend the peso since the Aug. 11 primary, Sandleris said.

Argentine dollar bonds earlier fell as investors fretted about the consequences for the national economy and debt burden after Fernandez ousted business-friendly Macri.

The benchmark international 2028 dollar bond 040114HQ6= dropped to 38.80 cents on the dollar, its lowest level since the start of the month, according to Refinitiv data.

“Argentina is heading towards a default and there will now be tricky negotiations with the IMF, which has huge skin in the game and is desperate to safeguard its resources, and bondholders,” said Gabriel Sterne, head of global macro research at Oxford Economics.

Other economists said the market impact could be cushioned by the stronger-than-expected showing by Macri.

Shinji Ishimaru, senior currency analyst at MUFG Bank, said the result showed voters had some understanding of the need for fiscal tightening. “I think that could help steer the new government’s policies toward the center of the road.”

Investors are waiting for Fernandez and his vice presidential running mate, populist former President Cristina Fernandez de Kirchner, to detail their plans for Latin America’s No. 3 economy and their stance with creditors and the IMF.

Argentina’s Merval stock index .MERV was down about 3% in late trading after rising more than 6% earlier.