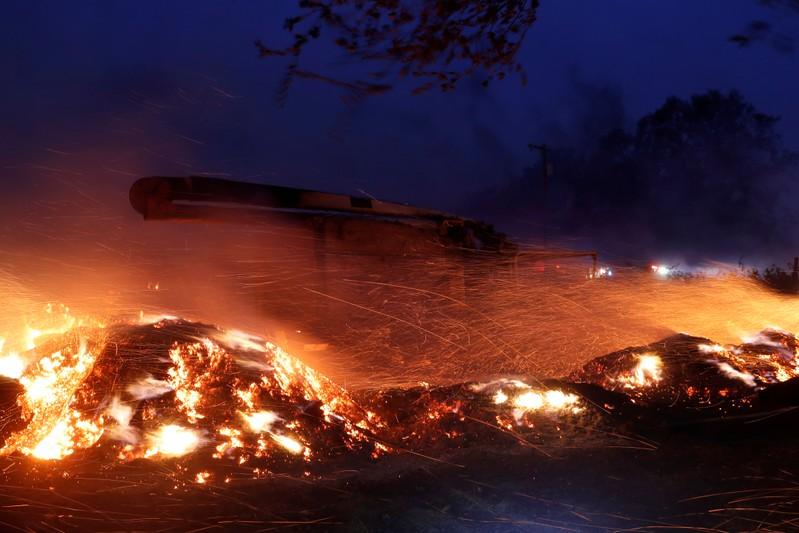 HEALDSBURG, Calif. (Reuters) – The southward march of a Northern California wildfire toward the more populated areas above the San Francisco Bay led officials on Sunday to raise the number of residents ordered to leave their homes in the area to 180,000.

Embers fly around a burnt out truck during the wind-driven Kincade Fire in Healdsburg, California, U.S. October 27, 2019. REUTERS/Stephen Lam

The increase, from 130,000 earlier on Sunday, came as wind gusts pushed the Kincade Fire down from the rolling hills and wine regions of northern Sonoma County and threatened communities as far south as northern Santa Rosa, officials said.

That fire, along with another blaze in southern California, prompted Governor Gavin Newsom to declare a statewide emergency and to urge residents to heed evacuation orders.

The touristy town of Healdsburg, which was ordered evacuated on Saturday, was largely deserted by Sunday morning, except for an occasional National Guard Humvee patrolling the area.

Sonoma County Sheriff Mark Essick, defending the evacuation orders which he said had been criticized by some as overly cautious, increased the police presence in evacuation zones.

A key reason for the extra police was “to really assure people that if they have evacuated, their property, their homes will be safe,” he told a news briefing.

The Kincade Fire and Tick Fire in suburban Los Angeles are the biggest of several blazes plaguing California during its traditional wildfire season when hot, dry winds blow westward across areas of summer-dried shrubs ripe for burning.

High wind forecasts prompted utility Pacific Gas & Electric Corp on Saturday night to shut off power to about 940,000 customers in 38 of the state’s counties to guard against the risk that an electric mishap could spark a blaze. The utility said the protective blackouts could last two days.

Steve Volmer, the chief fire behavior analyst at the California Department of Forestry and Fire Protection (Cal Fire), said the Kincade fire was threatening to jump to the west of U.S. 101, where there have been no fires since the 1940s.

By early on Sunday, more than 3,000 firefighters and other crew members were battling the Kincade Fire, which had scorched 30,000 acres (12,141 hectares), burned down 79 structures and threatened 31,175 more, Cal Fire said. Only 10% of the fire area was contained, it said.

A forecast for slowdown in wind speeds to 20 to 40 miles per hour (32 to 64 km per hour) during the day on Sunday could aid firefighters before higher gusts are expected to return overnight.

No fatalities were attributed to either the Kincade or Tick fire, and the causes of both have yet to be determined.

In Los Angeles County, the fire department said it had contained 65% of the Tick Fire near the city of Santa Clarita, about 35 miles north of downtown Los Angeles, which has charred 4,615 acres, including 22 structures, since Thursday.

Most of the more than 40,000 residents who had been ordered to evacuate were allowed to return to their homes by Saturday afternoon, the county fire department said.