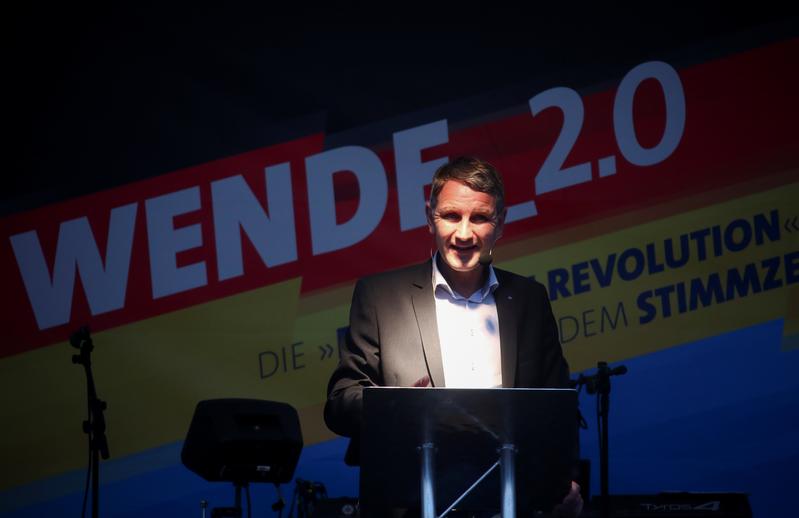 The result follows the AfD’s successes in the eastern states of Saxony and Brandenburg, where it surged into second place in Sept. 1 elections, and marks a setback for Merkel’s Christian Democrats (CDU).

After gaining seats in the national parliament for the first time in 2017, the AfD is trying to build momentum in the east and campaigned in Thuringia for “Wende”, adopting the word used to describe the fall of East German Communism.

“Thuringians have voted for the Wende 2.0,” Bjoern Hoecke, the AfD’s leader in the state, said after release of the exit poll in a “drain the swamp”-style pitch.

“This is a clear sign that a large part of Thuringia says: This can’t go on. We need renewal – this should be taken seriously,” Hoecke told ARD.

Both the CDU and SPD, which rule together in an awkward ‘grand coalition’ at national level, lost votes from the last regional election in Thuringia in 2014.

The AfD more than doubled in share of the vote and the Linke edged up, reflecting the polarization of state politics in which the two parties on the far left and right of the political spectrum performed most strongly.

Bodo Ramelow, who became the Linke’s first state premier in 2014 when he teamed up with the SPD and ecologist Greens in Thuringia, told ARD: “I see myself clearly strengthened. My party clearly has the mandate to govern, and I will take it up.”

However, the exit poll showed that after Sunday’s vote such a red-red-green, or R2G, combination would not command a majority, meaning Ramelow would likely have to form another coalition to remain state premier.

None of the parties want to go into coalition with the AfD. One of a number of nationalist movements making waves across Europe, the AfD is the third largest party in Germany’s federal legislature behind the CDU and the centre-left SPD.

Hoecke is an anti-immigrant former history teacher who has drawn criticism from Jewish leaders and mainstream politicians for calling Berlin’s Holocaust memorial a “monument of shame” and demanding that schools highlight German suffering in World War Two.

Hoecke’s ultra-right stance is tearing at AfD unity. His drive to pull the party further to the right has alarmed more moderate members aware that his fiercely anti-immigrant stance is unlikely to gain traction with voters in western Germany.

In July, scores of senior AfD members condemned Hoecke’s rising influence. The fight for the future direction of the AfD is expected to come to a head at a party conference in December.