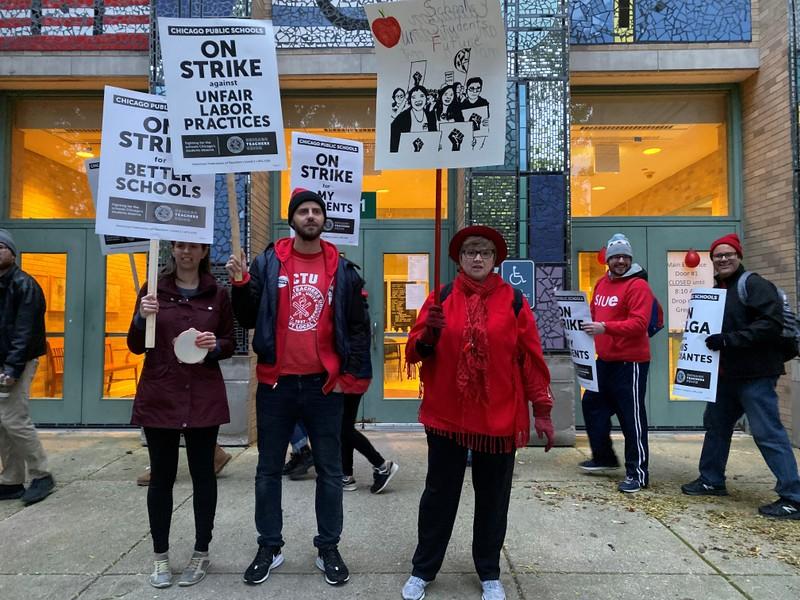 (Reuters) – Student athletes in Chicago are fighting for their right to compete after a seven-day teachers’ strike disqualified some from championships and imperiled scholarship chances for others.

FILE PHOTO: Teachers and parents picket in front of and near Helen C. Pierce School of International Studies during the first day of a teacher strike in Chicago, Illinois, U.S. October 17, 2019. REUTERS/Brendan O’Brien/File Photo

The strike has coincided with state-wide playoffs which teams have competed for months to attend and where college talent scouts look for candidates for sports scholarships.

With college futures on the line, athletes on Friday pushed state sports authorities to waive rules that bar them from competing for issues such as being able to train or complete a requisite number of matches.

Dozens of football players and other student athletes descended on city hall to demand Chicago Mayor Lori Lightfoot reach a deal to end the strike.

A state sports authority later waived rules to allow several football teams to take part in playoffs, so long as the strike ended by Wednesday.

But after cross country runners and their parents packed a courtroom seeking the right to race at a Saturday regional championship, a judge barred their lawsuit, saying it would force teacher coaches to cross picket lines.

“I’ve been working for this goal for years,” said Tommy Donohoe, 17, a senior at Lane Tech College Prep High School, after the judge knocked down a lawsuit filed by parents seeking the right for them to run. “For other students, who are potential scholarship athletes, it’s even more important because for them there is money on the line.”

About 300,000 students in Chicago missed classes on Friday as the city’s teachers union and public school district worked to resolve a deadlock over class sizes, support-staff levels and pay in negotiations over a new contract.

Chicago Teachers Union President Jesse Sharkey told reporters there was no breakthrough in talks but negotiators were “down to a small number of issues.”

He apologized to athletes who had been blocked from playoffs that were “one of the biggest parts of their life.”

“This is genuinely one of the parts of this process that hurts me personally,” said Sharkey, adding that his son was a student athlete.

The strike is the latest in a wave of teacher work stoppages in cities and states across the United States. Some of the strikes, such as a six-day work stoppage in Los Angeles last winter, have involved similar demands for more school resources.

The Chicago strike has lasted longer than any of the recent walkouts in other districts, except for a three-week teachers strike in Union City, California in June.

It has been the first major political test for Lightfoot, a political newcomer who was elected in April.