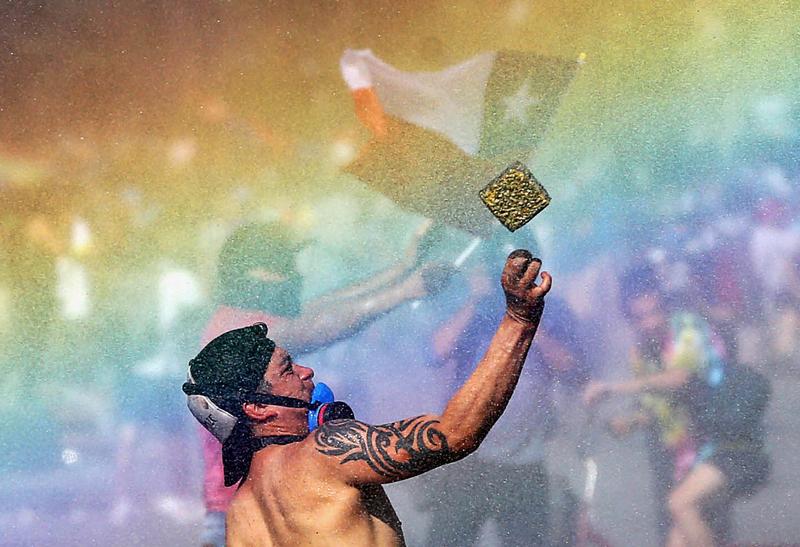 By Dave Sherwood and Natalia A. Ramos Miranda

SANTIAGO (Reuters) – Chilean truck and taxi drivers brought gridlock to the capital’s highways on Friday in a protest against high road tolls that added to a week of rowdy demonstrations over social inequality.

Protests that started over a hike in public transport fares boiled into riots, arson and looting that have killed at least 16 people, injured hundreds, and caused millions of dollars of damage to businesses and infrastructure.

On Friday morning, traffic was snarled along some major access points to Santiago as tractor trailer trucks, cars and taxis slowed to a crawl, honking horns, waving Chilean flags and bearing signs of protest at toll rates.

“No more tolls! Enough with the abuse!” read bright yellow-and-red signs plastered to the front of large trucks.

Chile’s unrest is the latest in a flare-up of protests in South America and round the world – from Beirut to Barcelona – each with local triggers but also sharing underlying anger at social disparities and ruling elites.

Chileans on social media, meanwhile, were planning “The Largest March in Chile” later on Friday, with rallies expected to paralyze major cities.

“These protests were necessary,” said street vendor Sergio Perez as he prepared a fruit stand. “But they’ve made everything difficult, especially getting around.”

The streets of downtown Santiago were littered with trash and broken glass and reeked of tear gas early on Friday from the latest marches and clashes. Downtown traffic was light as many businesses and schools remained close.

Chile’s military has since taken over security in Santiago, a city of 6 million now under a state of emergency with night-time curfews.

“I used to take one bus to get to work, now I have to take four. This must stop,” said Julio Herrera, 71, as he waited at a bus stop on his morning commute.

President Sebastian Pinera, a billionaire businessman, told the nation on Thursday he had heard “loud and clear” the demands of Chileans. He said he would send a bill to Congress on Friday to boost pensions by 20% for the elderly.

On Thursday, he sent lawmakers legislation to overturn a recent hike in electricity rates, among several measures he said he hopes will turn the protests into an “opportunity”.

Prosecutors said on Thursday that since Wednesday night 734 more people had been charged in connection with protests, looting and arson nationwide, with 324 taken into custody in Santiago. More than 7,000 have been charged since Saturday.

An online poll conducted by local company Activa Research of 2,090 people between Oct. 22-23 found 83% of respondents said they supported the goals of the demonstrators, but 72.5% said they did not support violence as a method of protest.

U.N. human rights boss Michelle Bachelet, a former president of Chile, said she would send a mission to her homeland to investigate allegations of rights violations. The Chilean government said it would welcome a U.N. delegation, along with representatives of global NGO Human Rights Watch.