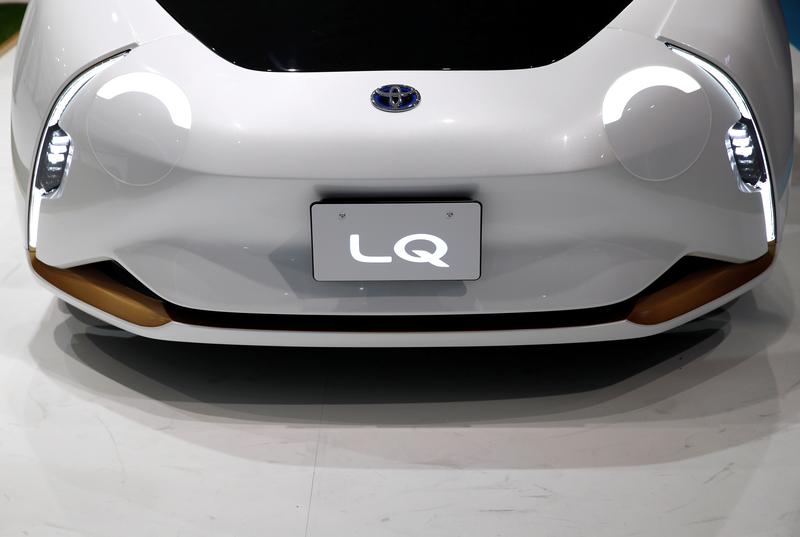 TOKYO (Reuters) – When Toyota Motor Corp (7203.T) launches its all-battery Lexus next year, the luxury model will be able to drive autonomously on highways, a big step for the Japanese automaker, which has so far trailed rivals in bringing self-driving cars to market.

Announced at the Tokyo Motor Show this week, the new Lexus shows how Toyota is putting its research on self-driving technology to work in cars that have limited automation.

That strategy comes as more automakers – and even governments – are taking a longer view toward artificial intelligence (AI) and self-driving cars, paring back development targets after fatal accidents in Tesla Inc (TSLA.O) cars have shown the complexity of the technology.

While Toyota is using the motor show to tout its push to become a “future mobility company” showcasing futuristic, AI-based driving companions and miniature delivery robots, on the sidelines, Tomoyama injected a dose of reality about the pace of developing future cars.

“Right from the get-go, we figured it’s going to be a time-consuming endeavor,” he said. “There’s no particular need to rethink the time frame for our AI self-drive technology investment and development.”

Toyota next year will release its first so-called “Level 2” autonomous car, capable of driving itself on the highway, “from entrance to exit, with traffic merging capability,” Tomoyama said.

Other automakers already market “Level 2” cars, but a growing number are pushing out their schedules to develop future autonomous technologies, citing the high hurdle to clear before enabling cars to perform more driving tasks.

Nissan Motor Co (7201.T) also has abandoned an earlier in-house target to develop cars which can drive themselves on city streets by 2020. At the moment, its cars are able to drive on highways and park autonomously.

German automaker Volkswagen AG (VOWG_p.DE) is also grappling with the size of the challenge.

“We really thought at the beginning, it would be just maybe next year or so,” said Aria Etemad, a project manager at Volkswagen Group Research. “But as we dig into that topic, we see huge complexities that we are facing.”

Tesla is a notable exception to the cautious view. Chief Executive Elon Musk told investors on Wednesday that Tesla could release software to enable “fully functional full self-driving” capability by the end of this year.

However, Musk qualified that by saying cars would still need to be “supervised” by a human driver. By the end of next year, Musk said Tesla hopes to release autonomous driving software “reliable enough that you do not need to pay attention”. But he added “acceptance by regulatory authorities will vary by jurisdiction.”

It’s not just car manufacturers that are tempering expectations. Singapore, a pioneer for practical testing of autonomous vehicles, has struck a more cautious tone.

“We are not in a rush to be the first adopter,” Khaw Boon Wan, the transport minister, said this week. “I look forward to a larger-scale adoption of AV (Autonomous Vehicle) technology in Singapore, but I think this will not be in the near future.”

“If Singapore is saying this, then maybe other governments will follow suit,” said Hussein Dia, professor of future urban mobility at Swinburne University in Melbourne, Australia.

“Whatever comes out of Singapore, the world watches and listens,” he added, referring to its driverless expertise.

General Motors Co’s (GM.N) self-driving unit, Cruise, said earlier this year it was delaying the commercial deployment of cars past its target of 2019 as more testing of the vehicles was required.

In GM’s case, unexpected technical challenges, including the difficulty for cars to identify whether objects are in motion, are requiring the company to take more time and caution to develop its technology, sources have told Reuters.

The Japanese components maker Denso (6902.T), Toyota’s biggest supplier, believes it will take years for the technology for fully self-driving cars to hit the roads. For now it is working toward developing cars that can accelerate and brake on their own with driver monitoring.

“The most difficult aspect of developing these driving systems is to anticipate unexpected movements in the vehicle’s surroundings,” said Hajime Kumabe, the head of Denso’s engineering R&D center in Tokyo.