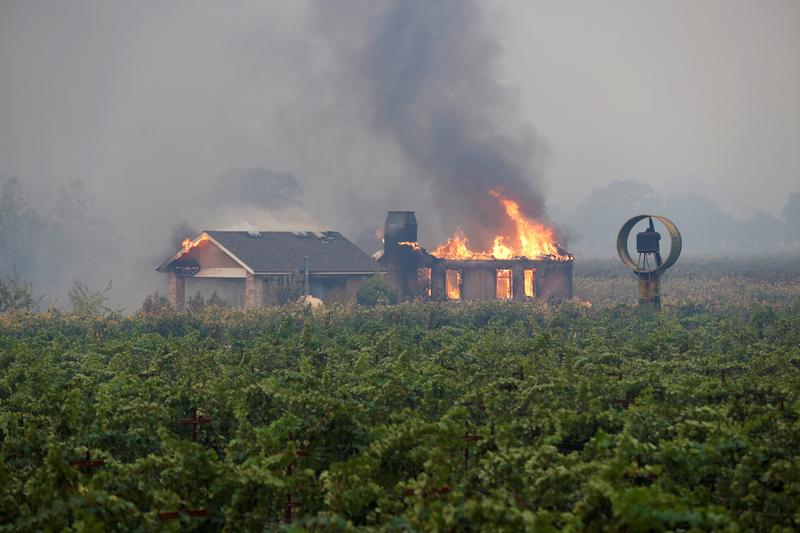 SAN FRANCISCO (Reuters) – Shares of California power utilities tumbled on Friday, with already bankrupt PG&E Corp (PCG.N) losing a quarter of its value, on concerns their equipment may have set off fast-moving wildfires across the state.

FILE PHOTO: A burning structure is seen in the middle of a vineyard during the Kincade fire in Geyserville, California, U.S. October 24, 2019. REUTERS/Stephen Lam/File Photo

While the cause of the Kincade Fire in Sonoma County, the worst of blazes currently affecting California, has not been determined, it appears to have erupted near the base of a damaged high-voltage transmission tower owned by PG&E.

Edison International (EIX.N), which supplies power to southern California, slumped 10% as a wildfires forced the evacuation of more than 40,000 residents north of Los Angeles.

Shares of PG&E, which is California’s largest investor-owned utility and serves the northern part of the state, fell 26% to $5.34.

Pacific Gas and Electric Co, a unit of PG&E, said in an “electric safety incident” report to the California Public Utilities Commission that one of its power lines malfunctioned at about the time and in the location of the Kincade Fire’s origin on Wednesday night.

Neither PG&E nor the commission said whether the damaged tower or the malfunctioning transmission line attached to it were suspected of igniting the blaze, which has destroyed about a dozen homes and other structures and forced some 2,000 people to flee.

The California Department of Forestry and Fire Protection (Cal Fire) said it was investigating. It listed the same place and time of origin for the Kincade Fire as the tower incident reported by PG&E. California’s wildfires generally erupt in the fall as hot, dry winds blow westward.

PG&E had shut off power to residents from the Sierra foothills to areas north and south of San Francisco. But by early Friday, it said it restored power to most of its 178,000 customers in portions of 18 counties, and it expected to have the rest reconnected by the end of the day.

PG&E filed for Chapter 11 bankruptcy protection in January, citing potential liabilities in excess of $30 billion from major wildfires in 2017 and 2018 linked to its equipment. Its stock market value has shrunk to $3 billion from $25 billion a year ago.

Earlier this month, PG&E was hit with strong criticism after it temporarily cut off electricity to more than 730,000 homes and workplaces in northern California in a bid to reduce wildfire risks posed by extremely windy, dry weather.

Critics said the shutdown, unprecedented in its scope, was haphazardly conducted on too large a scale, with insufficient advance notice to affected customers.