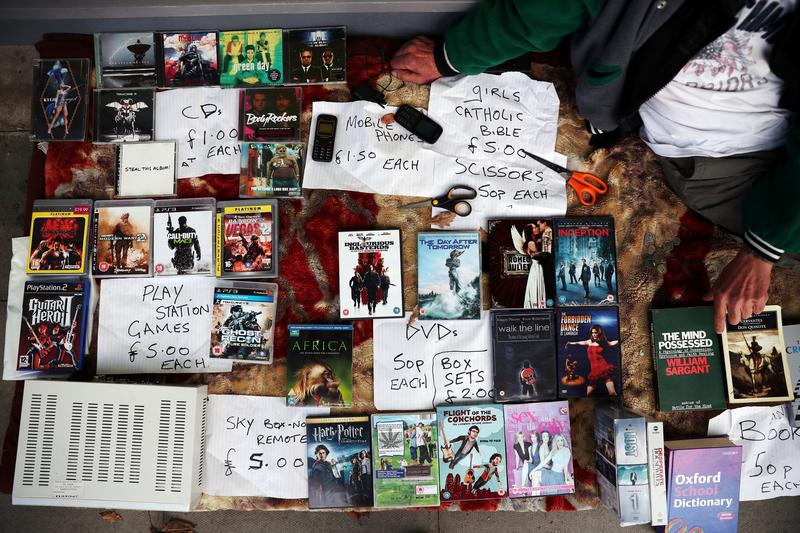 LONDON (Reuters) – For Bill Elliott, who has sold flowers on the streets of London since he was 13, the promise of Brexit is fading.

Bernard Dixon who is homeless, sells his belongings whilst sitting on the pavement on Streatham High Road in south London, Britain, October 16, 2019. REUTERS/Hannah McKay

“I’ve given up on it slightly, to be honest. It’s gone on so long,” the 56-year-old street vendor, a Leave supporter, said as he removed a bouquet from its plastic wrapping. “It looks like we’d take any deal now just to get it done.”

He relies on flowers shipped to Britain from growers in the Netherlands to sell to his customers on a corner of Streatham High Road, which people in the South London neighbourhood claim is Europe’s longest high street.

A no-deal Brexit, under which Britain would leave the European Union without a transition deal to soften the economic shock, might cause short-term disruption to the capital’s wholesale flower markets.

But he says that might now be worth the risk. “Sometimes I think we should just have a clean break and see how things lie in five years’ time with our economy,” Elliott said.

“My opinion is that the EU has run its course. There are too many countries taking from it and not enough putting in. If we did make a success of Brexit, I don’t think the EU would last.”

Three years and four months after British voters shocked the world by deciding to become the first country to leave the EU, the nation remains divided on how, or even whether, to do it.

Prime Minister Boris Johnson once said he would rather be “dead in a ditch” than ask for a delay to the Oct. 31 Brexit deadline, which is already the third such cut-off date.

But now it looks like he will need more time.

For many voters in Streatham, leaving the EU is just as worrying a prospect as it was when the referendum was held in June 2016.

Much of the area lies within the borough of Lambeth where nearly four in five voters backed staying in the bloc, the strongest pro-Remain vote in Britain which reflected Streatham’s diverse, multi-cultural population.

Judith Perez, who was born in Spain but has lived in Britain since she was a child, worried that Brexit would diminish the opportunities for younger British people who might want to study and work in other European countries.

She said several of her friends had left the city for Berlin, Barcelona and Spain since the referendum.

“It’s not perfect, the euro (zone), of course. There is high unemployment,” Perez said as she worked in a charity shop selling used clothes, books and compact discs.

“But you’re part of something. I remember how things were here when I first came here. It wasn’t great. It’s much better now. We are going backwards, not forwards.”

‘PULLING UP THE DRAWBRIDGE’

For Kafele Fairman, 54, who moved to London aged 16 from Jamaica, Brexit comes with a different worry – the fear of racist discrimination on the back of tougher border controls.

“As black people travelling, we have enough problems as it is,” she said while enjoying a glass of Prosecco on an outside table of a bar in the sunshine on the high street.

In one of Streatham’s churches, rector Anna Norman-Walker said people in her congregation held different political views but their Christian belief in a shared humanity had remained undimmed by the Brexit upheaval.

“Living in Streatham, we have a lovely, ecumenical, diverse community and people feel sad that the world seems to be scurrying back to individual little corners and pulling up the drawbridge,” she said.

Brian Watkins, 58, who works in ADS One, a building supplies shop piled high with paint brushes, drills and saws, said he voted to leave the EU but now believed that he had been lied to about how much money Britain would save as a result, one of the main claims of the Leave campaign in 2016.

He, like most people in Britain, said he had no idea what the outcome of Brexit would be, with members of parliament (MPs) as deadlocked as ever over the way forward.

“It looks like it will be going on for another three months and who knows, perhaps another six or seven after that,” Watkins said. “We might as well stay in. The MPs aren’t going to let us out, are they?”