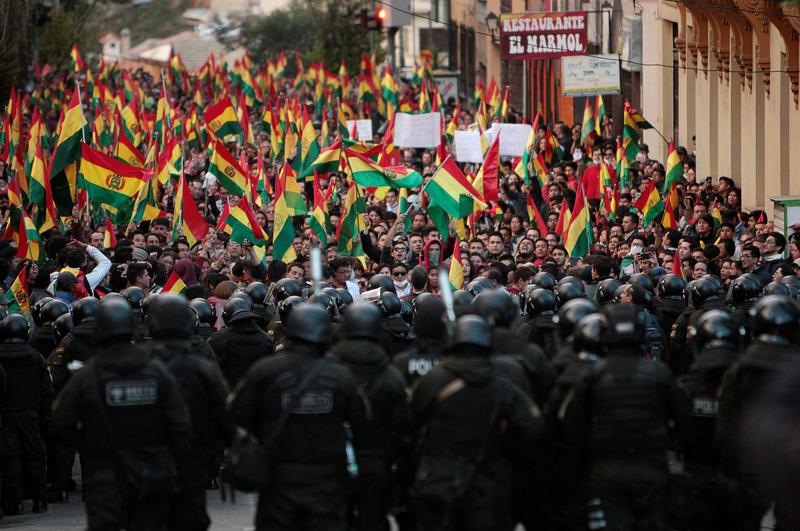 LA PAZ (Reuters) – Bolivians blocked streets in La Paz on Friday demanding an audit of a controversial election count that handed President Evo Morales a outright win and with it a fourth consecutive term that would extend his rule to nearly two decades.

Morales, 59, who swept to power in 2006 as the country’s first indigenous leader, claimed victory in the Sunday vote and railed against the opposition who he accused of leading a coup d’etat with foreign backing.

Anti-government protests had begun on Sunday, when an official vote count was suspended for almost a day. A confident Morales said then his socialist party MAS would get an outright win, despite an official rapid count data showing the left-wing leader heading to a second round against rival Carlos Mesa.

The final official count showed Morales with an over 10-point over Mesa on Thursday night, which meant he would avoid a risky second round head-to-head – even as the election monitors, the opposition and foreign governments criticized the count.

On Friday, roads in the north and south of La Paz were blocked by protesters, with normally busy streets empty of cars. In the morning, there were few signs of violence, as people marched with banners saying “No to dictatorship”.

The official election observer, the Organization of American States, has already called for a second round despite Morales’ 10-point win, while the United States, European Union, Brazil and others adding their voice.

In the region, left-leaning governments in Mexico and Venezuela have backed Morales, a former union leader for coca farmers who has overseen steady growth and relative stability in one of South America’s poorest countries.

“There has to be a second round,” Marco Antonio Fuentes, a departmental official in La Paz, said Friday. “The electoral arbitrator is unfortunately not reliable,” referring to the vote count halt that saw one senior electoral official resign.

Mesa, a former president who leads the Citizen Community party, has claimed to have evidence of electoral fraud. “The government is despising the popular vote,” he told local television channel Unitel on Friday.

Officials and diplomats raised concerns the conflict could hit Bolivia’s ties with global trade partners and an economy that is already straining under declining gas exports.

Jaime Duran, a fiscal and budgetary deputy minister, said in comments to the Red Uno channel that the conflict in recent days “will undoubtedly” have an effect on the economy, though reassured there no issues with supplies of fuel and food.